Tuff has released recordings from its Jim Gillette era to coincide with its 30 year Anniversary. To celebrate its three decade mark, the band will issue a special edition vinyl titled ‘Decadation’ and ‘The Glam Years 1985-1989’ on CD digipak. Both releases are courtesy of the band’s official imprint label RLS Records and already available digitally at iTunes.

That same year they released their official debut with ‘Knock Yourself Out’ via Tuff Muff Music Inc. That EP was a cassette only release, and now those tunes among others are available for the first time ever on CD. 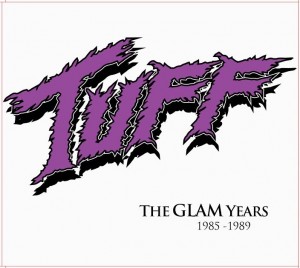 Most people are familiar with Tuff‘s classic line-up era of lead vocalist Stevie Rachelle, bassist Todd Chase, drummer Michael Lean and guitarist Jorge DeSaint. However, for about one year prior, the band was fronted by Jimmy L’Mour, whose real name was Jim Gillette, rather than Rachelle who came on board in 1987. During Gillette‘s tenure in the band, Tuff recorded six demos and now a 29 years later, those early tracks have been remastered from original tape and are included as part of ‘The Glam Years 1985-1989’ digipak CD. In the spring of 1987, Gillette left the band Tuff and released the record ‘Proud And Loud’ under his real name before forming Nitro with Michael Angelo.

The release comes with a 12 page booklet that includes several rare and never seen before photos (both line ups) and extensive liner notes from Gillette, Todd Chaisson (aka as Chase) and Rachelle. ‘The Glam Years 1985-1989’ showcases all of the band’s official recordings from the 80s featuring both Gillette and Rachelle. The group recorded and mixed these tracks at several legendary Los Angeles area studios including Sound City, Sunset Sound Factory and Baby O Studios.

The vinyl release ‘Decadation’ will hit the streets in October 2015 and highlights the 1988 and 1989 years with the classic line up of Rachelle, DeSaint, Chase and Lean. The entire Tuff music catalog including the band’s major label debut ‘What Comes Around Goes Around’ (Atlantic Records 1991) is available on iTunes.

Tuff is still active in 2015 with both Rachelle and Chase on board. The group has a number of live dates coming up including an appearance at the Cathouse Live concert on August 15, 2015 at Irvine Meadows in Irvine, California; a performance at Rock N Skull in Pekin, Illinois on October 17, 2015; and, an appearance on the Monsters of Rock Cruise Monsterwood in October 2016.