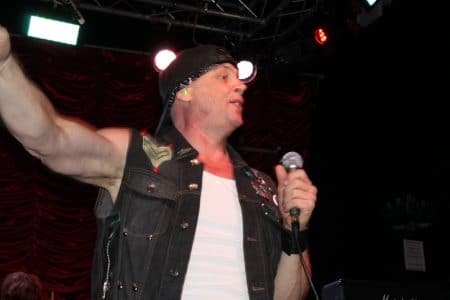 The Civic Center will be the biggest venue we have ever performed in as the capacity is 3,000 people.

Also, one of Motley Crue’s first mega shows was here headlining New Year’s Eve of 1982 to a sold out crowd.

The show tonight will be BulletBoys, D’Molls and Tuff…..

I recall being side-stage during soundcheck and Marq Torien was standing there.

I had never met him previously but went up and introduced myself.

Marq was a bit short with me, but also seemed to be in a good mood.

He had a right to be happy as their debut record had just went Gold off their hit single “Smooth Up In Ya”.

He then said something like, “We gotta put this thing on the map” and walked away.

I recall the feeling I had that night just before Tuff went on stage.

It was the first time I had experienced that “arena feeling” when the lights go out.

The house lights were still on, music was playing and then suddenly the music fades, the lights go out and the crowd roars.

It literally gave me goose bumps as I typed that line.

It was a mini-arena and the place was already packed with 80’s rock enthusiasts.

Michael’s drums sounded like canons and Jorge’s guitar was searing through the P.A. system.

But sadly, as soon as it started – it ended.

Standing on stage in front of thousands, as they cheer you on and scream your name.

You get the feeling that you are invincible.

It’s a feeling that I can’t describe. And when it goes away, you want it some more.

This is the additicion that is being in a band and wanting to succeed.

Chasing that high that you felt the first time and wanting it again, and again.