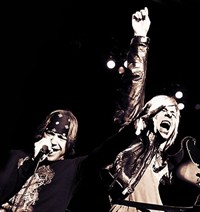 Tunnel have released a brand new single entitled “Disarray” at their website tunnelonline.bandcamp.com. The single features Tunnel members Dave Henzerling (King Kobra, Keel, Big Cock, Lizzy Borden) and Scott Hammons with the help of Tesla drummer Troy Luccketta and represents the band’s first new material since the release of their self-titled debut in January or 2010.

Dave Henzerling met vocalist Scott Hammons in late 2008 while they were both playing shows with the band Icon. In early 2009, they got together to work on new material for an as-yet-unnamed project and the chemistry just clicked. Dave had already laid down basic tracks with Los Angeles drummer Ryan Hoyle (Collective Soul) and together with Scott on lead vocals, they completed a collection of eight songs by the end of the hot Arizona summer.