New comedic glam rockers Turbo Shokk have released their first single “Put The Hammer Down” for streaming from their upcoming debut album Get Radical, which will be released on December 2, 2016. 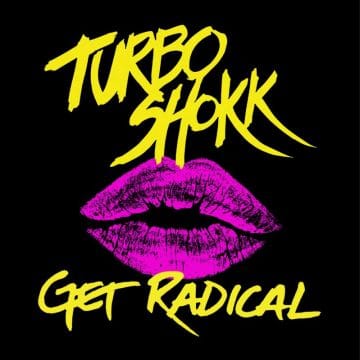 Sleaze Roxx will be premiering Turbo Shokk‘s next song to be released on November 11, 2016.

Turbo Shokk‘s first interview was with Sleaze Roxx earlier this month during which the three official members of the group were asked what can people expect from the band’s debut album Get Radical.

Stack Manley replied: “The people? They’re gonna hear what they’ve been missing, man. Look out there at the music world and tell me what’s wrong. Where’s the rock? Nobody rocks anymore! If they even try, they don’t rock hard — not nearly hard enough! The fire burned out, man… and Turbo Shokk isn’t just here to like… put some old newspaper in there, kneel down and blow on it… You’d probably get light headed and fall over into the hot coals or something. No! We’re here to blast that son of a bitch with napalm! Now that’s what I’m tryin’ to tell you!”

Drummer Michael Arcane added: “I really think people will like the drums. I think the album would sound weird without them. And I hope the fans get that same vibe.”

You can pre-order Turbo Shokk‘s debut album Get Radical at the band’s Bandcamp page.

Put The Hammer Down