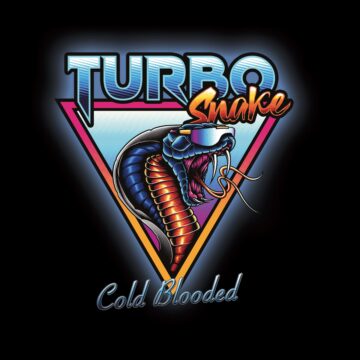 “Hair Metal has sent an arctic chill from the Great White North and delivered “Cold Blooded,” the brand new EP from Turbosnake featuring the smash single and video “Road Warrior.” The new video gives the fans a taste of what the band is all about at that is a straight-up, good time, party.

Bassist Eric Roelofsen best describes Turbosnake: “I really like the term “80s Rock/Arena Rock” with a “Hair Metal, 80’s Wrestler Production. Going to a show should be an event and we want to slither into your ears.”

The “Cold Blooded” EP takes you back to the glory days with the big hook and arena vibe, but hints at the modern production, a transcendence in its purest sense. With the world beginning to open up and the concerts in full-swing, TurboSnake is launching their piece of the Arena Pie and gearing up to hit the live scene to keep the venom flowing.

Turbosnake’s bombastic Arena Rock adventure began as a project in April of 2020 when founder Eric Roelofsen was bored with the norm and decided to begin writing some songs. The songs were born from Eric’s deep-seeded love of classic Hair Metal, Big hooks, heavy guitar and melody driven runs injected with some glitz and glam. He approached his friend Ryan Thomas to see if he wanted to write some lyrics to it and sing something on it. Ryan was influenced heavily by the classic screamers of the day, Sebastian Bach and Axl Rose, to name a few and he states his deep passion for the genre “Couldn’t get enough of the genre and just never got out of it.” The wheels for a venomous, injection of  pure, melodic, hard rock perfection were put into motion and Turbosnake began their plan to be the torch that lights Arena Rocks assault on the 21st century.

The new EP “Cold Blooded” can be ordered now at: https://smarturl.it/tscoldblooded 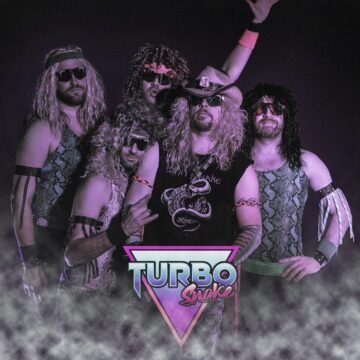 Eric Roelofsen: “I met Ryan around 12 years ago when I started playing with him in a hair metal band called “Fisted Sister.” I knew he was a great singer and I had recorded some punk music prior to starting Turbosnake. When I asked him to write for the first song, he was singing in a Guns N Roses tribute band. So he wrote some stuff for the tune and it was great! We carried on from there and continued to write more things and I recruited Andrew Tapley (a guy I played in my first band with between the ages of 16 and 21) and he helped out with guitar fills and solos on some stuff. For drums, we recruited Greg Keegan, a friend of both Grant (our other guitar player that I had played in many bands with…including fisted sister) and Ryan, and the band was complete.

Turbosnake‘s music is inspired by all of the big 80s hits. On the first Ep “Big Things Coming,” you’ll hear Mötley Crüe, Ratt and Def Leppard influences. On the new EP, Cold Blooded, Eric was inspired by Lita Ford, Metallica, AC/DC and even a Lost Boys soundtrack song called “I Still Believe.” There was also inspiration from the song “Danger Zone” by Kenny Loggins for the new track “Pit Viper.”

Roelofsen states: “I usually have a song in mind where I like the vibe and do something similar without telling Ryan what song that inspired it. By the time we add drums, extra guitars and fills, plus Ryan’s vocals, it always becomes something completely different. I started using some analog synth on this last record as well so the songs incorporate the sounds that defined the 80’s, but also bring a modern element of production to the mix.”