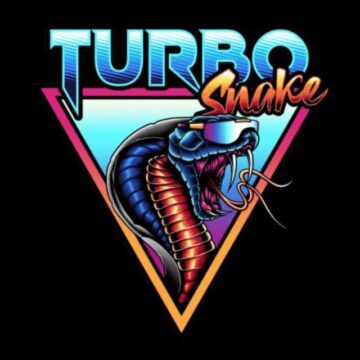 “Pretty pumped to announce that Turbosnake has just signed with RFL Records out of Pittsburgh, PA.

In an interview with Sleaze Roxx back in August 2020, Thomas explained how the band got started. The singer indicated: “Turbosnake was formed during the Covid-19 pandemic. I play in a Guns N’ Roses tribute band and also a ’90s cover band. Eric also plays in several bands and the two of us had also previously played together with Grant a few years in an ’80s hair band tribute, called Fisted Sister. With live music being thrown on the back burner, Eric reached out to me with the idea of writing an ’80s hair album. I loved the idea from the get go and we’ve just been plugging away at it since March.”

In terms of how they came up with the band name Turbosnake, Thomas stated: “We really wanted to have a name that screamed ’80s and let you know what you’re in for. I think with our name and the look, right away you will most likely know if you love us, or hate us. We had bounced a few ideas around. I think we had mentioned ‘Alive’, ‘Vintage Ninja’ and a few others along those lines. Turbosnake came out of Eric’s mouth one day and we just started laughing our asses off and Turbosnake was born. He did the same thing years ago, when we formed the ’80s tribute band. During practice one day, he just whispered ‘Fisted Sister.’ I’ve never seen five guys piss themselves so hard. We instantly knew that was what we were going with. Turbosnake was the same moment again.”