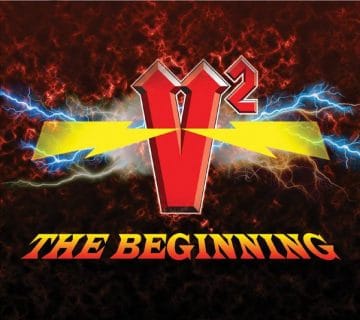 V², pronounced “V-Squared”, consisting of twin 13-year-old virtuosos — guitarist/vocalist Vittorio and drummer/vocalist Vincenzo — have released a new album entitled V²: The Beginning on August 5, 2016 on Audio Fidelity Records via Red Distribution, a division of Sony Music Entertainment. It’s a combination of the duo’s first two albums, We Are V² and Pass The Rock N Roll Torch, with newly recorded songs.

“…Finding inspiration from fellow brother bandmates like Angus and Malcolm Young of the aforementioned AC/DC and Eddie and Alex Van Halen of Van Halen, V² are putting their own best collective hard-rocking foot forward with V²: The Beginning, a collection of electrifying original material that champions the very spirit of rock (“Long Live Rock and Roll”), not to mention sharing a touch of the blues (“The First Time I Ever Tried”) and a mutual love of cars (“She’s My ’57 Chevy,” “’59 Caddy”). 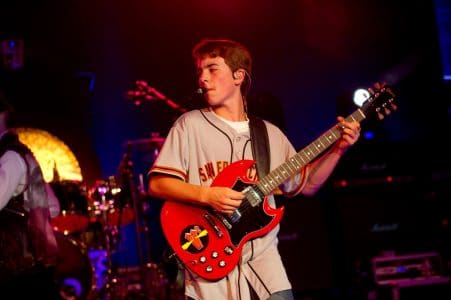 V²: The Beginning was produced by Ron Nevison, who’s engineered and produced albums for Led Zeppelin, The Who, Bad Company, Heart, KISS, and Damn Yankees (to name but a few). “This is one of the best albums I’ve ever produced,” Nevison declares — high praise indeed. “It was an honor to work with someone like Ron Nevison,” says Vincenzo, who adds, “Having fun and keeping rock alive is what it’s all about.” Observes Vittorio, “We want you to hear our music at its best, and V²: The Beginning is a good place to start.”

Vittorio and Vincenzo were nine years old when they performed their first concert at Rock Star University’s House Of Rock in their hometown, Santa Rosa, CA. At that time, they played six original songs and six AC/DC covers. It was there that they first caught the ear of Ron Nevison, who instantly offered to produce their debut album and ultimately went on to produce We Are V² and Pass The Rock N Roll Torch and V²: The Beginning.

In 2014, V² was invited to play two songs at the Los Angeles Music Awards show, where they wound up winning seven awards in all seven of the categories they were nominated, including “Rock Single of the Year” (for “Long Live Rock N Roll”). That same year, they had four singles from We Are V² reach #1 on DigitalRadioTracker.com’s “National Rock Chart” and the same four singles charted in the Top 15 on Billboard’s “Hot Singles Sales Chart,” including “Girls! Stars! Money! Cars!” which reached #1….”

V² (VSquared) Hard and Fast from the album THE BEGINNING