The group released a holiday video with its rendition of the Christmas classic “Deck The Halls.”

In a prior interview with Donna from Connecticut posted on the Twisted Sister website, Mendoza talked about how he joined the band in the first place:

“It was Jay Jay, Eddie, Dee, and Tony Petrie, with Kenny Neil on bass. That was the lineup. At the time I was in and out of a couple of bands, but TS needed an extra crew member. So I actually was a crew member for Twisted Sister, for probably about six or seven months.

And one morning, we got back from some gig in Jersey, the sun was coming up, and the phone rings and my mom wakes me up and says, Jay Jay is on the phone. And I’m thinking to myself, OK, it’s 7:30 in the morning. I just got to sleep an hour ago; this must be some kind of emergency.

I picked up the phone and said to Jay Jay, “What’s up”? He goes, “Are you still looking for band”? And I said, of course, I’d rather be in a band thank working for one, no offense to you… and he said “No, no I understand. I have a band for you”. And I go okay, what band is it? And he goes, “Oh, you’ll know who they are. I go, “Who”? And he said “Twisted Sister”. Now I can’t believe I’m hearing this and I said, “C’mon John, don’t fuck with me”. He said he was serious. I said, “OK, John, what’s the catch here”? And he said, “There is no catch. Kenny Neil quit. He’s gone, he’s got his religious reasons for leaving…Jesus called Kenny on the phone this morning and said that he was doing the work of the devil, so he’s quitting.”

So I told him I would do it! Then all of a sudden he says, “Great see ya later”, and he hangs up!! Click! And I said to myself wait a minute, am I dreaming? Did this really happen? Am I going to get to join one of my favorite bands? The band I love the most? So I called him back and I go “Jay Jay, did we just have a conversation”? He said “Yes”. I asked, “Well, am I in the band”? And he goes “Yes, we expected you to take the gig. So we’ll start rehearsal this week, ok?” I said “Yeah, ok”. He goes “Ok, goodbye”… click! And he hangs up on me again! So I said to myself, I guess I’m not dreaming, and I went to lay down, and now I can’t sleep. I can’t sleep at all…

I remember it was a good time and a bad time in my life. My father was very sick at the time; he was in the hospital dying. So I told my mom what happened, my parents had met Dee and Jay Jay several times before, and my mother was very happy about it. I visited my father in the hospital, and told him as well. He said “That’s great. They’re really nice guys, good stuff, go for it”. And he was really happy for me, too.

We started rehearsing that week, but I didn’t have to rehearse that much with them because I knew most of the material. Before I joined the band I would play six or seven songs a night with them, I would just get up when Kenny didn’t feel like playing, so I knew most of the material already. We only really needed five or six rehearsals, just to make sure everything was tight. This was probably in late November, around Thanksgiving. 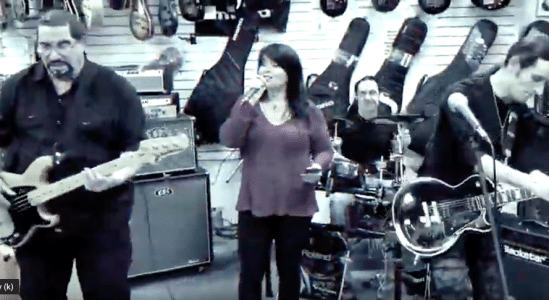 We planned my first night with the band as a real band member to be December 10, 1978 at a club called Zaffys. It was a Wednesday night. That’s what we shot for, and we tightened everything up, Suzette was making my costume, getting all ready. Well, my father took a turn for the worse. On December 7 1978, he died. Now, the day before he died, I believe he knew he was going to die, and I was in the hospital with him. I happened to go over by myself, because my mom went to pick up my sister. He asked me, “Where are your mom and your sister”? I said “they’ll be here in a little while”. So my father said to me,” Listen, no matter what happens to me, I know you have to start playing in a few days. No matter what happens to me, you keep going.” I said “Dad, what are you talking about”? He said to me “do you hear me?” My father was a tough guy, a World War II veteran, a tough army guy. Front lines, killing people, in hand-to-hand combat… a tough character. And then he just said, “You make me that promise. I don’t ask too much of you. You make me that promise. You keep going.” I said, “Well I don’t know dad”… he said, “I’m going to tell your mother and your sister also so they understand.” I said “Dad, the guys in the band, they’ll understand”. He yelled at me and said “Don’t question me!” He yelled at me…in the hospital! “Don’t you question me, I’m the boss!” I said, “Ok dad, all right, no problem, I won’t argue!” I didn’t want to get him cranked up in the hospital, you know. So my mom and my sister got there, and we laughed a little about that but when I went out to get something to drink he told them that, too. I didn’t know it at the time, but he told them that he wanted me to play, no matter what happened.

I left the hospital and went to a real quick rehearsal with TS, and then I went home. The next day I got up and went to the hospital, my mom and my sister got there at the same time. The staff told us that he had passed away already, about five or six minutes before we got there. We got there the same time every day. They knew we were going to be there because he had been in the hospital for about three weeks already, and they knew our routine. He passed away five or six minutes before we got there.

So we went home, and I immediately called the guys in the band to tell them what was going on. They said well, whatever you need. If you want to postpone it for a while, whatever you need. I asked them to give me a few hours. Jay Jay said he’d tell the guys in the band. A few minutes later I got a call from Kenny Neil. Now you have to understand that Kenny Neil wanted out of Twisted Sister. He didn’t want to play clubs anymore; he was just tired of it. Anyway, he called me, and this was one of the nicest gestures that anyone has ever done for me, one of the nicest things that anyone has ever done for me. He said to me, “I’m sorry to hear about what happened. I’m not trying to get back in the band, but I’ll play for a week, two weeks, two months, what ever you need so the band can continue on. I’ll take your place for as long as you need.” I told him I would discuss it with my family and see what’s going on. He said, “Whatever you need. If you don’t want anything I understand. Just so you don’t have to feel obligated right now to the band, I’ll keep playing until you want to step in.”

My mother heard the conversation. I asked my mother her thoughts. She said, “Your father told you to move on and go.” I said ‘”Ok Mom, but what am I going to do, bury him on the 9th and play on the 10th?” She said to me, “One thing you don’t want to do is cross your father. He will come back to get to somehow. And he made it a point to tell me and your sister that he told you that you had to move on and do what you have to do to get that business done. So my advice to you is GO DO IT!” And I said to her but Ma, it might look bad…she said “It won’t look bad. If he told you to do it, then you go do it. If you really feel that you don’t want do it, then that’s your business. But advice from him is advice well taken.”

I called Jay Jay and told him what was going on. He told me the ball was in my court, and to do what I wanted needed do. He knew what Kenny offered. In the meantime my mother is in the background saying, “Go ahead, just go!” I said, “Jay Jay, it’s a go. We’re gonna go, Wednesday night, we’re on”. He asked if I was sure and I told him, “We’re on”.

This was on the 7th. We buried my father two days later on the 9th. The next day, the 10th, I was on the stage with Twisted. So it was tough. It was one of the happiest and one of the saddest times of my life at the same time.”