The legendary heavy metal rockers Twisted Sister were part of the Amnesia Rockfest this year, which was held in Montebello, Quebec, Canada from June 23 to 26, 2016.

Twisted Sister‘s website contains a feature called the Armadillo Road Report and on June 30, 2016, a report was made with respect to Twisted Sister‘s apparently horrific experience at Amnesia Rock Fest. 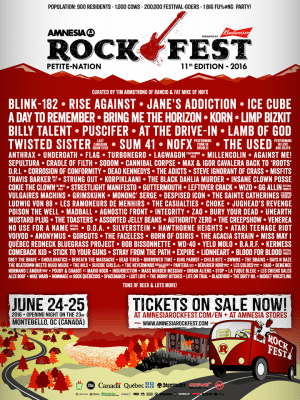 The following is most of the article from the Armadillo Road Report published on Twisted Sister‘s website:

Given the intensive labor involved in working crew, I truly thought that I would never again be able to bring you a full road report for one of these shows, but along comes Amnesia Rockfest, in Quebec Canada. You would be hard-pressed to find a festival more appropriately named– Amnesia: the festival we would all like to forget!

For those unwilling to read the full report, allow me to give you the short version: this festival sucked donkey balls. Big hairy brown donkey balls. The fact that Twisted Sister sounded as good as they did was ENTIRELY due to your faithful and diligent road crew and a rock and roll band that never quits, never gives up and plays with 200% every single time. Thank you TS! zero props at all to the nincompoops at the festival that made our jobs that much harder.

Oh, I’m just getting started. No, you gotta hear this. Really….

Let’s begin with the 2.5 hour drive from the hotel, shall we? Apparently, there is some regulation for bus drivers that dictates that if you have more than ten passengers, you cannot drive through the Ontario city limits. We’re a rock bus…so of course, we went to (what else?) ELEVEN. Our driver took us on a scenic route from Montreal to Quebec, by way of Vancouver. We offered to duck down into the seats… we offered to pay the fine…we offered to throw one of us off the bus into a ditch (not saying who!)…to no avail. It was a long hot trip that drove some of the crew to madness, in the form of a somewhat obnoxious puppet show using trash bags. My sock was banned from participating. I’m not over that yet.

We arrived on site—short by two crew due to tragic and sudden deaths in their respective families—and immediately divided up their responsibilities as we now had a very small window of time to get a lot done. My first order of business was to obtain credentials. We call them credentials—in layman’s terms—backstage passes….wristbands….day laminates… whatever it is that will allow us to move freely about the stage and dressing rooms without hassle. And of course, we were short. So the first order of business involved some hardcore schmoozing to try to score a few extra wristbands. The band NEVER wears these, by the way, but they always need to have them in case they want to drop by catering, swing by the stage, etc. Mitch da man helped us out once again.

So far, not bad. But the next order of business: the dressing rooms. Over the years, Twisted Sister has had some very fine accommodations. And on occasion, they have been provided dressing rooms so remarkably sub-standard that they cannot be utilized. On this occasion, they directed me to “the Chateau.” The building was certainly beautiful on the outside, and once inside, it appeared quite comfortable and lush. Until a few more steps in.

Twisted needs privacy before the show. At this place, it seemed like everyone had credentials and it was giant drunkenfest in the lobby leading to TS’s dressing room. Notice the active word ROOM. Typically, we get a dressing for the band (preferably two), plus a room for crew and production, and a room for Dee. Before you start screaming prima donna, Dee needs that room so that he can stretch out, exercise and vocalize to get himself warmed up before stagetime.

How they thought we would fit 15 crew, 3 video guys and 5 artists in a hot, stuffy 10×10 room is absolutely astonishing. Even worse, were the provisions that they left for us. Now mind you, we have a very simple rider. It’s not fancy…it’s not ridiculous or difficult…and it’s actually quite flexible. Typically, we have a well-stocked fridge of juices, soda, coconut water, sports drinks, non-alcoholic and very small amount of regular beer and wine. There is typically a simple arrangement of fruit, cheese and meat trays and various snacks plus we usually go through 2-3 cases of water.

In this dressing room: we had a dozen small water bottles. Five bags of chips. Three granola bars. A couple of tiny toffee candies. And a pack of something…I think it was gum. No mirrors. Some hand towels. Not even enough furniture for all five band members to sit down. And no access to a restroom. The toilet was down a flight of stairs, down a hallway…around a corner…and it was one toilet for about 300 drunk people. Insult to injury? Our name was spelled wrong on the dressing room door. SERIOUSLY???

That’s not good. But I can work with that—I’ve managed to do more with less.

Until I asked the question: “How do I get to the stage?” I frequently run between the stage and the dressing rooms—sometimes I have clocked 14 miles of running between the two. It’s just a part of the job. Back and forth. To get to the stage, they offered Mitch and I a lift in a golf cart—so far so good…

Until it dropped us off at a dock. That’s right. A DOCK. They informed me that this was the only way to go. If I tried to take a van, it could take 45 minutes or longer to get to the stage, because the festival had one road only, and it now resembled Mardi Gras in full swing, with stories of fans banging and rocking the vans of artists as they attempted to drive thru. So I headed to the stage by boat, to try to find an alternate dressing room solution.

So I take a shuttle…to get to a dock…board a FUCKING BOAT that took me 15-20 minutes across a pond where it deposited me at the end of a 200-foot floating dock. Then it was a dirty dusty jog down a side road, across streams of urine coming from the overflowing portapotties…then eventually…to the stage. The TEENY TINY Jagermeister stage, aptly named, because it made me want to throw up.

So Korn and Blink 182 get the human-sized stage, but Twisted Sister gets a stage the size of a gnat’s mammography plate. That’s right. Big enough for gnat tits. What’s that you say…. Gnats don’t have tits? Sure, they do…just teeny tiny ones. How teeny tiny are gnat tits? Just slightly bigger than the FUCKING JAGERMEISTER STAGE AT AMNESIA ROCKFEST! But hey…you know…it’s just Twisted Sister. Just one of the biggest metal acts HEADLINING the festival circuit today. It’s just their FAREWELL tour. Just the LAST FUCKING TIME any of their Canadian fans will get to hear them play. No big deal. So Twisted Sister headlines Sweden Rock…Graspop Metal Meeting…Hellfest…and See Rock… but hey…let’s give them third bill on a high school stage.

We had nowhere to set up….nowhere to store our gear…nowhere to work. And from what I saw and experienced personally, some of their local crew treated us as if we were just the neighbor’s kids playing air guitar on tennis rackets. In the six years that I have apprenticed with the crew, I have never experienced such a lack of respect. In short, they sucked balls.

The band arrived soon after, and my babies, I swear to you all, I have never seen that look on their faces before. They had driven the distance from the former dressing room (at the festival entrance) to here…and from what I understand, it was a long harrowing drive through a street packed with unruly drunken revelers. (I can personally attest that this was the drunkest, most stoned crowd I’ve ever seen. Pot smoke so thick it would have choked Cheech & Chong). Once safely inside, they prepped for the show, true professionals that they are, never once commented on the odd and barren accommodations or the disturbing ride to the new dressing room.

So let’s talk about the setlist, shall we? The tour is called “Forty and Fuck It”, referring to the number of years Jay Jay, Eddie and Dee have played together. Apparently, the festival production thought “Forty and Fuck It’ was the stage time. They gave us 45 whopping minutes. Twisted Sister offered to play an hour (even though they were contracted for 45 minutes). The festival refused. So after we rolled tape “Long Way to the Top…” we had 42 minutes. Even with Dee keeping it short between songs… there was so little time. And they played at performance tempo!

8. S.M.F. is what they WOULD have played if the festival hadn’t pulled the plug.

Seven songs. Seven damn songs. And those fans rocked out hard every single song, every single note. They waited all day in the sun to hear these songs for the last time, and Canadian S.M.F.s, we salute you!

To all of our S.M.F. Canadian fans…we’re so sorry. We love you, Canada. We love you, Canadian S.M.F.s. We’re sorry the douchecanoe twatwaffles of Amnesia shitfest wouldn’t even let us play two more stinkin’ minutes of SMF to say THANK YOU Canada on the farewell tour. We passed a note to Dee explaining that the festival was literally pulling the plug on us, so Dee started to say the words “thank you” and “goodnight” when the KING of all douchebags reaches over and shuts down the sound board.

That’s right, kids. Here is Twisted Sister, playing for the last time EVER in Canada, and not only would they not give us the respect of playing the last song (which lasts 2 minutes) but they cut Dee off as he was saying “Thank You and Good Night!”

Just when we thought it couldn’t get any worse, they tossed our equipment and gear off stage as if we were dogs. We scrambled to protect the gear and equipment as much as we could. I have never seen such treatment—even at the most hurried changeovers, we all work together—road and local crews…as a team. The TS crew demonstrated the most incredible restraint and professionalism in the midst of being treated so poorly. We literally had to pack our guitars while standing in the mud—even though they had a full 60 minute changeover—plenty of time to at least let us remove the guitars to the back of stage right. It was clear that the people organizing and working this festival did not care about the artists or their road crews. Or as far as I’m concerned, the fans either.

Fuck your boat, fuck your tiny-ass stage, fuck your forty-five minutes and fuck your five bags of chips. We’re going back to Europe and playing the real festivals! Canadians rockers…go to Heavy Montreal next year instead–this festival doesn’t deserve your attendance.