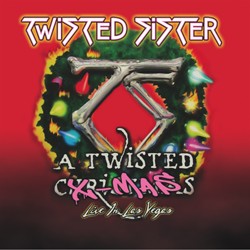 On October 30, 2012, Eagle Rock Entertainment will deliver an early holiday treat, with the release of Twisted Sister’s ‘A Twisted Xmas – Live In Las Vegas’ on DVD, CD, and Digital Video/Audio.

Previously available only on DVD, as part of the 2011 ‘From The Bars To The Stars’ 5 disc DVD boxed set, ‘A Twisted Christmas’ features the classic tracks “I Wanna Rock”, and “You Can’t Stop Rock ‘n’ Roll” alongside such Christmas favorites as “White Christmas,” “Deck The Halls,” “12 Days Of Christmas,” and many more. “O Come, All Ye Faithful” gets a very special Twisted treatment, with a music bed of “We’re Not Gonna Take It.” This is the kind of Christmas spirit that only Twisted Sister can unleash, produced as always by Twisted Sister bassist extraordinaire Mark “The Animal” Mendoza.

“The Twisted Sister Live in Las Vegas performance was the realization of all that the show could be,” states French. “It brought together all the elements which made the Twisted Christmas album such a huge success combining the unique transformation of some of the world’s greatest Christmas classics done in pure Heavy Metal style with extraordinary visuals. The energy of the live performance on the recording reflects our own shock and awe as we, the band, watched our dreams unfold. It really was A December to Remember.”

‘A Twisted Xmas – Live In Las Vegas’ offers a unique Xmas show from a truly original band. “Mistletoe and Wine” this is not…