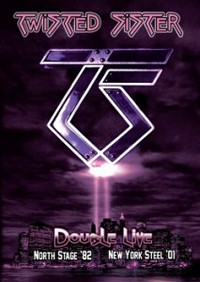 In 1982, Twisted Sister was the wildest, most outrageous club band on the Long Island, New York scene. As a goodbye to their loyal fans just prior to the band crossing the Atlantic to record its groundbreaking Under The Blade debut album, guitarists Jay Jay French and Eddie Ojeda, vocalist Dee Snider, bassist Mark Mendoza and drummer A.J. Pero performed at The North Stage Theater on Long Island. This incendiary concert footage–in its entirety–represents the only commercially-released video performances of long-retired club favorites “Lady’s Boy” and I’ll Never Grow Up” among the 14 stand-out tracks. The disc comes complete with brand new interviews from all five musicians about their feelings as they left the New York club scene to become an international phenomenon.

In 2001, with New York City reeling from the effects of September 11, Twisted Sister, who hadn’t played together for 13 years, were approached by Metal radio personality/promoter Eddie Trunk who asked if they’d headline “New York Steel” to benefit the families of those firefighters and police officers who lost their lives. Putting aside personal difficulties for the good of the cause, the band started rehearsing. Scenes of those rehearsals, as well as profound new interviews chronicling the intense inter-band chemistry, are revealing and fascinating. When Trunk introduced the band that night, with New York Mets baseball hero Mike Piazza at his side, the reaction was so spectacular, the seeds were planted for a return to form that continues to this day.