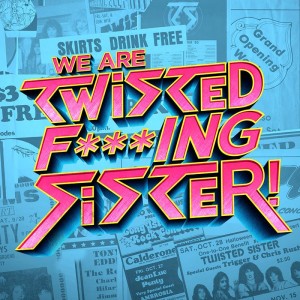 The movie We are Twisted F***ing Sister! is now available for pre-ordering on DVD, iTunes and Bluray at the movie’s official website.

You can now pre-order the Twisted Movie on DVD, and iTunes in all territories! Also Bluray in the US!! Just go to: http://twistedsisterthemovie.com/#store and click on your area and the appropriate links will be displayed for you! And for those of you in Scandinavia, you can already buy it NOW!

And while you’re there, check out the rest of the movie website!”

Amazon promotes the movie as follows (with slight edits): “In the mid-1970s, Dee Snider and his Twisted Sister bandmates claimed glitter rock for their own, cross-dressing their way to headlining every club within 100 miles of New York City, from New Jersey bowling alleys to Long Island beach bars. With gigs six nights a week, they were the most successful live bar band of suburban New York, selling out 5,000-seat shows fueled by their no-holds-barred stage presence and aggressive metal setlists. But by the early 80s, they found themselves balancing on a double-edged sword, hugely popular with local audiences but without a national following or a record deal to speak of. When Twisted Sister finally got their big break in 1983, they’d go on to become one of the biggest glam rock bands of the decade, their over-the-top live shows drawing sell-out crowds and their music videos defining an early MTV network. To anyone who knew the hard-fought battle they d won to get there, the band that killed disco was no overnight success. We Are Twisted F***ing Sister! is the mesmerizing, wickedly appealing and never-before-told story of the ten grueling years leading up to the band s legendary career, recounted directly by the band themselves, their managers and their biggest fans.”