Rhino Remasters 1984 Top 20 Smash Album With A Bonus Disc Of Unreleased Studio Recordings, Plus A New Track By The Original Lineup For 25TH Anniversary Edition

After rocking clubs from Los Angeles to New York City for more than a decade, Twisted Sister made its bones in 1984 with the quintet’s second Atlantic Records release, a Top 20 album that stormed the charts with a string of hit singles and genre-bending videos. Rhino proudly wears a Twisted Sister pin on its uniform, celebrating the album’s multi-platinum success with a 25th Anniversary Edition that includes a bonus disc of unreleased outtakes and early demos from the original sessions, as well as a new track recorded especially for this collection by the 1984 lineup: Dee Snider, Jay Jay French, Eddie Ojeda, Mark Mendoza, and A.J. Pero. STAY HUNGRY 25th Anniversary Edition will be available June 30 from Rhino Records at all retail outlets, including www.rhino.com, for a suggested list price of $19.98 (CD), $12.99 (digital). 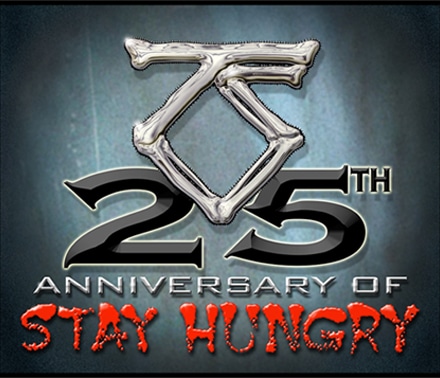 A limited edition pink vinyl package with the original “Stay Hungry” album art and bonus poster will also be released this summer at the suggested retail price of $24.98.

The first disc contains remastered versions of the nine tracks from the May 1984 original. The album was a smash thanks to a pair of fist-pumping anthems of youthful rebellion–“I Wanna Rock” and “We’re Not Gonna Take It”–that went Top 40. The band balanced those catchy songs with the harder edge of metal classics like “Burn In Hell” and “Horror-Teria,” a macabre song that would later serve as the inspiration for Strangeland, a 1998 horror film written by Snider, who also starred as the sadistic Captain Howdy.

The bonus disc uncovers 15 unreleased recordings that range from alternate versions of album tracks–including “We’re Not Gonna Take It”–to several non-album tracks such as “Death From Above,” “Prime Motivator,” and “Pay The Price,” a song from the band’s earlier club days. Along with the vintage tracks, the collection includes “30,” Twisted’s first new song in 11 years recorded by the band for the 25th Anniversary Edition.

“30” was originally written by Dee Snider with Marc Beeman and Sharon Lawson for the reality series Gone Country. Dee says, “While ’30’ was my attempt at a country song for the show, the realization was that rock ‘n’ roll is a direct outgrowth of country music. Since ’30’ was written about my Twisted Sister experience, it seemed only natural for us to record it and rock it out.”

More than a decade after Twisted Sister’s last show, the band reformed in 2001 for a benefit and continued playing together, including an astonishing run of over 50 headline festival dates performing in front of two million people in over 23 countries. In 2006, the band returned to the charts with Twisted Christmas, a holiday album that buzzsaws through yuletide classics such as, “Oh Come All Ye Faithful” and “Silver Bells.” That same year, the Long Island Rock and Roll Hall of Fame inducted Twisted Sister. The band is currently at work on a new album and a Broadway musical based on Twisted Christmas. Twisted Sister will headline the annual Rocklahoma music festival July 9-12 in Pryor, Oklahoma. Rock of Ages, Broadway’s latest musical hit with five Tony nominations, features Twisted Sister prominently in its story line and with the band’s aforementioned iconic anthems, “I Wanna Rock and “We’re Not Gonna Take It.”

Were you there? Be sure to check out Twisted Sister’s 1978 debut tour and more at www.twistedsister.com and www.myspace.com/twistedsister.