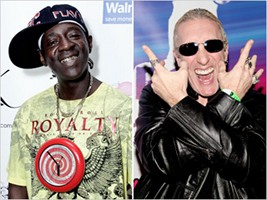 Now that ABC has given “Celebrity Wife Swap” the green light, Entertainment Weekly reports that the midseason reality show is filling out its cast.

Among the “Wife Swap” contenders are none other than aging music stars and reality show vets Flavor Flav and Dee Snider. The two will reportedly swap spouses in an as-yet-unscheduled episode of the spinoff series.

Snider and Suzette, his wife of 30 years, have four kids together, and Flav asked for his current wife Liz’s hand in marriage during a 2008 reunion episode of “Flavor of Love.”

“Celebrity Wife Swap” is exactly what it sounds like — a Hollywood spin on the network’s “Wife Swap” series, which has participants “switch lifestyles for a week.” Back in May it was reported that ABC had ordered six episodes of the show and that casting was underway.

Courtesy of www.sleazeroxx.com and www.cnn.com