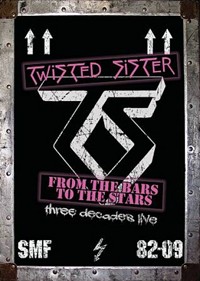 Eagle Rock Entertainment will celebrate Christmas early this year with the release of Twisted Sister’s ‘From The Bars To The Stars: Three Decades Live’, a 5-DVD boxed set, on November 8th. The lavish package comes complete with curios such as a Twisted Sister Christmas ornament, an official ‘New York Steel’ backstage pass, a classic two and a half-inch Twisted Sister pin and a reproduction of the first-ever SMF Fan Club letter.

Over eight hours long, ‘From The Bars To The Stars’ has to be considered the ultimate Twisted Sister boxed set. One of the five DVDs, ‘Twisted Xmas: Live In Las Vegas’, is a total exclusive, having never before been released in any format. This 2009 concert showcases the band performing such beloved holiday fare as “White Christmas” and “Come All Ye Faithful” next to “Burn In Hell” and “Deck The Halls” as only Twisted Sister can. In fact, Jay Jay French, Dee Snider, Mark Mendoza, A.J. Perro, and Eddie Ojeda, have made this holiday merriment a metal tradition for the past few years.

‘Live At Reading’ was filmed in 1982 at England’s biggest rock festival. A bonus 2011 band interview is included.

‘Live At Wacken’ documents the band’s 2003 Wacken Open Air Festival reunion appearance in Germany. Complete with behind-the-scenes backstage footage and band interviews about their 1980s rise to world domination, break-up and reunion, it also contains their entire set on the big stage at this most prestigious of European Heavy Metal festivals.

Any SMF would agree that tThis is one boxed set no Twisted Sister fan can do without!