“Twister drop brand new video for their new single Young & Affected after the single was released on May 31st 2019. 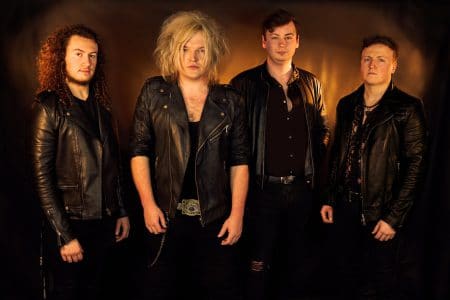 “Over the last year we have been working on, what we believe are our best songs yet. The new tracks have taken a massive step up on all fronts. With a much harsher approach to song writing, only the catchiest hooks, the ballsiest riffs and the most powerful beats will make the cut. When recording the song we went to the renowned Parr Street Studios in Liverpool to work with production extraordinaire Tony Draper. Not only was the production top notch but Tony really helped us think outside the box and go in directions we would have never imagined. We are ecstatic with how the track sounds and know that it will be a welcome change. ‘Young & Affected’ is probably our heaviest song to date with a break section that has elements of progressive and heavy rock.

Possibly the most challenging aspect of this release was the video. We thought that the rest of the release was some of the best content we have ever created and needed to step up our game to make a video to match. We wanted to capture the spirit of the song with gang mentality and used some of the ideas of crime from the track to create a storyline. Both the band performance and narrative are visually gripping, full of energy and boasts scenes that rival feature films. We feel that the video has real grit and drama but also captures our electric atmosphere. The videographer Sam Fenton really took our wild ideas and ran with them to produce a great end result. We truly cannot wait to release the video and the track. We are so proud and very thankful for all of the help and support that has made this all possible.” – Twister

Twister are a four piece rock band of that consistently deliver a high energy shows around the UK. Their anthemic songs are bursting at the seams with soaring guitars, gripping and unforgettable melodies, and unbeatable choruses. These 4 North-East Lads are absolutely going for it, and you can see just how passionate they are in their live performances! If you haven’t seen them live yet, make it a priority as you will not forget the name Twister!

Twister have sold out O2 Academy 2’s and other venues around the country on their last headline tour for their latest album release ‘Combined State of Mind’. Well gigged and ready to go at the drop of a hat, Twister have played alongside huge names such as Status Quo, Bumblefoot (Guns ‘n’ Roses), Jools Holland, Texas, Scouting For Girls, Electric Six, Simple Minds and many, many more!”