With the M3 Rock Festival‘s hard rock portion expanding from two to three days and taking up an entire weekend for its 11th edition from May 3 to 5, 2019, there is seemingly only one night to possibly attract the M3 audience to attend another concert while in the vicinity of Columbia, Maryland USA. 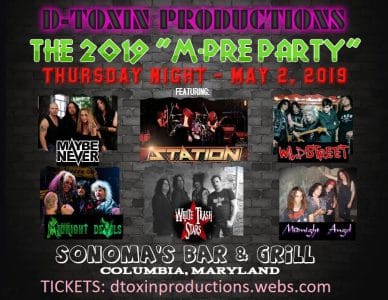 The M-Pre Party hosted by D-Toxin Productions and organized by Dave Dillman will be back for its tenth edition at Sonoma’s Bar & Grill in Columbia, Maryland, USA on Thursday, May 2, 2019. The line-up consists of perennial M-Pre Party favourites Station (who played the M3 Rock Festival in 2017), Wildstreet (who are playing the M-Pre Party for a third time), White Trash Stars (returning to the M-Pre Party for their second time) and newcomers, The Midnight Devils, Midnight Angel (featuring Mach 22 drummer Damian MonteCarlo), Maybe Never and Motorage featuring ex-Kickin Valentina frontman Joe Edwardz.

Tickets for the M-Pre Party, which sold out last year, can be obtained at D-Toxin Productions‘ website.

Sleaze Roxx stated the following in its review with respect to Wildstreet‘s performance at the M-Pre Party last year:

What set Wildstreet apart from the rest of the groups at the M-Pre Party was the amount of energy that they seemingly put out on stage. You had four very excited young band members that were really into it and then Jayk who commanded attention with his rock star look. It was simply very hard not to get into the group’s set with the great performance that all the band members were putting forth on stage. Both my friend Rich and I agreed that Wildstreet were very impressive. There wasn’t that much interaction between Jayk and the crowd but that really wasn’t necessary with such good songs and great stage presence.” 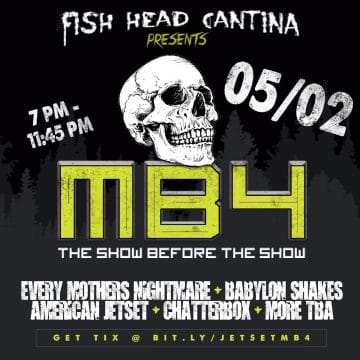 The inaugural MB4 The Show Before The Show will be taking place at the Fish Head Cantina in nearby Halethorpe, Maryland, USA on Thursday, May 2, 2019. The bands performing at MB4 consist of Every Mother’s Nightmare (who played Sleazy Slimey Sunday 3 last year), Babylon Shakes (who played the M-Pre Party last year), American Jetset and Chatterbox with more bands to come.

Sleaze Roxx stated the following in its review of Babylon Shakes‘ performance at the M-Pre Party last year:

The group plays very old styled influenced Hanoi Rocks and Faster Pussycat type songs, which went over really well with the crowd. You could tell that the three band members consisting of Clark (lead vocals and guitar), Gary Jordan (bass) and Jeff “Morty” Mortimer (drums) were having a lot of fun on stage. Jordan confided in me after their set that it was even hotter on stage due to all the lights but you really couldn’t tell that the threesome were suffering from the heat in any way. With Babylon Shakes having just released their new debut EP Exile To The Velveteen Lounge Vol 1 less than a month ago, I only knew a handful of songs from them since I only picked up their EP at the show itself. Nevertheless, it felt like I already knew a lot of the songs as they were easy to sing along to by the time the choruses got underway with Clark, Jordan and Mortimer all singing together really well. The songs seemed to have a bit of a similar formula or model to them, kind of like Autograph with their songs.

Babylon Shakes had the best stage clothes out of any band at the M-Pre Party with what I will call their retro ’70s look. They simply looked (and are) rock stars. One thing that also set the band apart from the rest of the groups that played at the M-Pre Party was that it was the drummer (Mortimer) addressing the crowd for most of the night. I enjoyed seeing how Mortimer was able to play drums and whenever he needed to sing background vocals, he was always able to find his mic, which was hanging over him somewhere, and flick it back in front of him without missing a beat. My favorite songs from the band on this night were the ones that I was slightly more familiar with consisting of “Velveteen Libertine” and “Motel Lights.” Overall, Babylon Shakes put on a great performance.”

Tickets for MB4 can be purchased via Mission Tix.