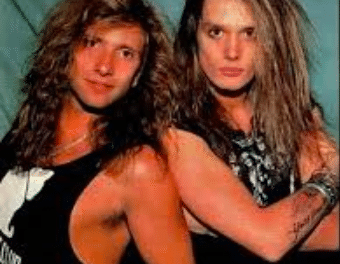 Former Skid Row frontman Sebastian Bach invited his former bandmate and drummer Rob Affuso up on stage at his show in Poughkeepsie, New York, USA on November 26, 2016 before they launched into a spirited version of Skid Row‘s “Rattlesnake Shake” from the group’s debut self-titled album. 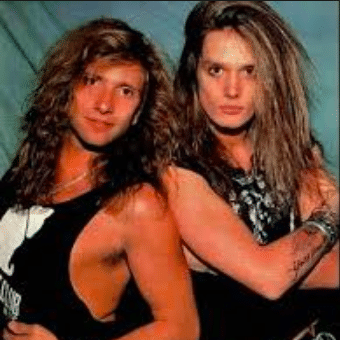 Bach had previously warned fans via his Facebook account that he had a special guest that would be appearing as he stated:

” Poughkeepsie! We are here! This is crazy!! I don’t know if I can think up a silly caption right now. Here is us on the bus last night in Hampton Beach hanging out with some Very Important People! See you tonight Poughkeepsie!! lookout for a special guest star on the stage this evening! Tomorrow night Washington Howard theater is the last night of the tour! This is our last chance to dance see you tonight Poughkeepsie!!!!! Pic: my love ? @suzanne_le_bach #18andlifeonskidrow IN BOOK STORES DECEMBER 6 #skidrow #book”

In a YouTube video which has since been taken down, Bach and Affuso spoke to the audience at The Chance Theater in Poughkeepsie, New York (as transcribed by Sleaze Roxx).

Bach started by stating, “Please put your hands together for your hometown boy — the original drummer from Skid Row — Rob Affuso.” Affuso added, “… Hey. We did this 20 years ago. This man is fuckin’ rocking, right? Holy cow!” Bach continued, “You know, there’s been a lot of guys whose said that they are in the band Skid Row and 99% of them are full of fucking shit! There’s fucking five guys in the band Skid Row and everybody else is a fucking hack [as Bach gives the middle finger]. This is the drummer for Skid Row — Rob Affuso. My name is Sebastian ‘Fucking’ Bach. I am the singer on the fucking albums! [Speaking to Affuso] Why don’t you sit down and let’s rock n’ roll right here. You guys want to have some fun? I’m in a silly mood. I’m in a silly mood. And when I’m in a silly mood, there’s only one song that’s going to do it the way you want it and that’s ‘Rattlesnake Shake.’ [go to 7:52 mark of video below]”