In what has turned out to be what can only be qualified as a rock festival disaster, two local Vermont, USA bands, Mind Trap and Raized On Radio, kept the party going for all the likely disappointed fans who turned up to attend the inaugural Shrinedom 2017 rock festival in Irasburg, Vermont, USA on Saturday, September 16, 2017. 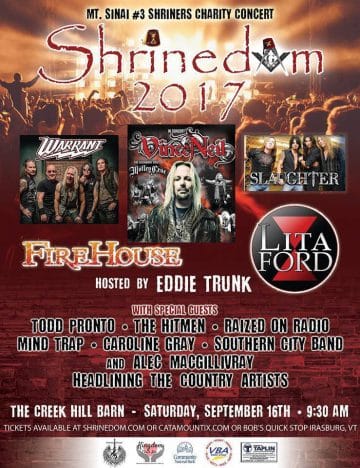 The Shrinedom 2017 rock festival certainly looked promising on paper with headliners Vince Neil, Slaughter, Warrant, Lita Ford, Firehouse and Trixter, along with host Eddie Trunk. However, due to the promoter apparently not paying a large amount of people including reportedly the bands scheduled to play, the festival “collapsed” before the bigger better known bands got to play.

However, Mind Trap and Raized On Radio decided to keep the party going on for whichever fans wanted to stick around and the two bands ended up taking turns playing to the reportedly enthusiastic crowd that stuck around.

The following are excerpts from the article from Paul Hayes and Andrew McGregor of the Caledonian Record posted today (with slight edits):

“… A sizeable crowd had already arrived for Shrinedom 2017 at the Creek Hill Barn in Irasburg when it was announced that ’80s rock acts Vince Neil, Warrant, Slaughter, Firehouse and Lita Ford would not be playing. Estimates ranged from 600 to over 1,000 people were on hand at that point.

Due to insufficient ticket sales, many of the performers and production company could not be paid, and they departed the venue abruptly at around 3 p.m., before the first headliner, Firehouse, was to take the main stage…. 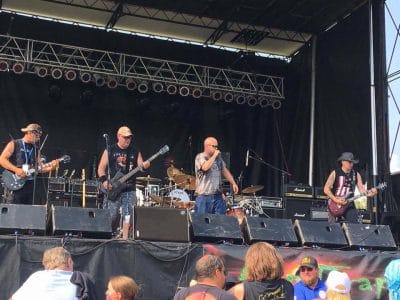 … Burlington-based cover band Mind Trap was performing on the main stage when things really began to fall apart. Todd Fournier, the band’s bass player and booking agent, said the group was four or five songs into their set when the stage manager signaled for them to stop playing.

Fournier said there remains a lot of confusion about the exact details of what unfolded but his understanding is the production crew responsible for the stage, PA system and lights called the show off because they weren’t going to get paid.

Fournier said when they left the stage, the crew started to dismantle the massive stage, lighting and sound system….

…It was at this point that the members of Mind Trap and RaiZed on Radio got together decided they would find a way to keep the concert going on the small stage. Mind Trap had their instruments, RaiZed on Radio had a PA system in their trailer and the groups were able to grab a nearby generator-powered light tree from a parking area to help supply electricity. But they didn’t know what to expect.

“When we were bringing equipment from the big stage to the small stage we were worried people were going to attack us,” said Fournier.

The reaction, though, was completely opposite. [Raized On Radio drummer John] Raymond said the crowd started high-fiving the bands.

“Everyone pulled together,” said Raymond. “A crappy thing happened here and we said, ‘This is not how we are going to let this end.’”

Fournier and Raymond both said the crowd thinned out a bit but they estimated several hundred stuck around as the two bands took turns playing into the night.

Raymond said he was worried about the Shriners being left on the hook for the possible financial fallout from the festival. He also expressed concern for the numerous food vendors that were on hand. Raymond said the vendors, who generously gave the bands food as the night wore on, feared they would lose money from their inventory costs. 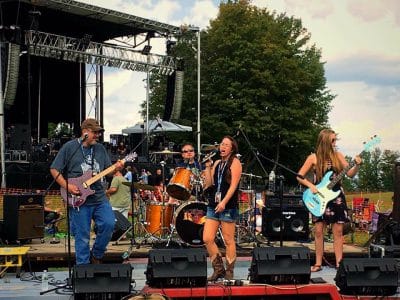 In the end though, both Raymond and Fournier said the night for them was one to remember. The two bands played til around 10 p.m. and they said what remained of the crowd was great. They said the crowd was appreciative of the two bands and a thrill to perform for.

“It was a good time, everyone was dancing, hooting and hollering,” said Fournier. He said the crowd even passed a hat around so the bands could get paid….”

“So what can we say about last night? But thank you to all the people who stuck around to rock the small stage with Raised on Radio and us. All of you and our two bands turned a bad situation into a night to remember. All and all it was an amazing night for us! Thank You all for showing what the power of music can do and when we all work as one there is nothing we can’t do! Thank You Raised On Radio rocking with us, you guys are amazing! Thank you to all the musicians that came on stage to jam with us. Thank you Dylan Fortin for all of your help. Thank you to the vendors that stayed to take care of us. Thank you to creek hill farm for having us.”