The fifth edition of MelodicRockFest will be occurring in May 2018 but at two different locations back to back across the world.

The following is an excerpt from the article that appeared on MelodicRock yesterday:

“Stuck with the problem of deciding between two amazing locations and two amazing venues, with two great partnerships to work with, we’ve taken the only responsible option – two MelodicRockFest events, back to back! 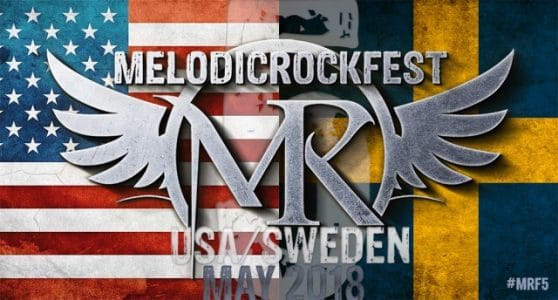 MRF5 will be happening as usual in the Chicagoland area; and for the very first time is also heading to the other side of the globe, for a special event in Sweden!

This initial announcement is being made 14 months out from the events to allow interested fans to plan ahead and save for what will be two unforgettable events.

Full lineups for both events are in advanced planning and will be announced in the not too distant future.

Both MelodicRockFest events will take place in May 2018 and will feature the best characteristics of previous fests, with a couple of new twists to keep diehard fans happy and offer up some tempting VIP options.

MRF organizer Andrew McNeice: “I was initially reluctant to dive into another event, but the partnership offers on both side of the Atlantic give me the confidence and enthusiasm to really deliver two exclusive events. I’m doing this for the fans. The true fans of this small, but amazing genre. I want to put on the two best MRF events yet and discussions with artists I’d love to take part suggest they will be. 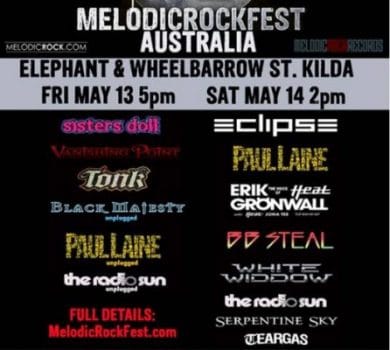 I’m going to deliver lineups that offer something you won’t get at any other event, with the emphasis on the hottest acts fans in both locations have been demanding to see.

You can expect there to be a crossover of some artists at both events and for those looking for a double holiday, there will be ticketing options that cover both events.

It’s also a great opportunity for some artists to perform that wouldn’t otherwise get a chance and I’d love to deliver a few surprises from yesteryear that the diehards will embrace.”

Further details will be announced in coming weeks including locations, exact dates and the all-important lineup and ticketing details.”

You can read the rest of the article at MelodicRock.

Sleaze Roxx attended the MelodicRockFest that occurred in Australia back in May 2016 and stated as follows for its review of Day One of the festival: “The MelodicRockfest kick-off at the Elephant and Wheelbarrow Hotel in St Kilda, Melbourne on Friday, May 13th and Saturday, May 14th saw the first ever showcasing some of Australia’s finest hard rock bands as well as international acts, none bigger than Erik Gronwall from H.E.A.T., Paul Laine (ex-Danger Danger) and Eclipse from Sweden.

Anticipation was high for this event as there were many bands I had not had the privilege of seeing, let alone thought I would ever see. The small venue provided an intimate atmosphere which capacity holding close to 500 people. This certainly allowed the fans to get up and close personal and I prefer these types of venues over a stadium holding thousands of people any day of the week.”