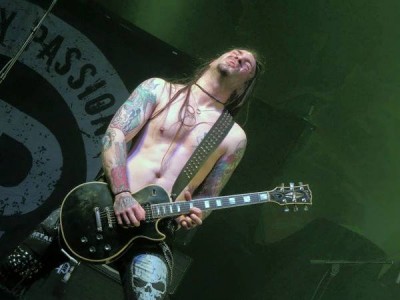 About a month and a half ago, a new “mystery” group Electric Vampire surfaced with a new single titled “Icarus Wings.” At the time, the band simply indicated that it had Swedish and American members.

Two of the musicians behind Electric Vampire have now unveiled their identity.

have been writing some new songs, and today am proud to introduce my band – ELECTRIC VAMPIRE, with Guitar virtuoso Chrisse Olsson, and our first single, ”ICARUS WINGS”.

CRANK UP THE SPEAKERS AND PLAY IT LOUD! ⚡️??‍♂️⚡️”

Olsson joined Crazy Lixx back in late 2015 and he has played on their last two studio albums, Ruff Justice (2017) and Forever Wild (2019). Prior to that, Olsson played guitar for Dirty Passion who released the albums Different Tomorrow (2011), In Wonderland (2012) and Dirty Passion (2015).

ELECTRIC VAMPIRE New band with members from American and Swedish bands.Who we are , does It matter? No..First song – ICARUS WINGS