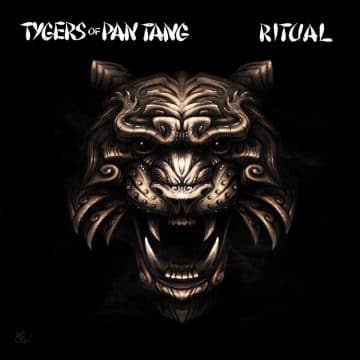 “Today, NWOBHM legends Tygers of Pan Tang release new video for “Art Of Noise”, taken from their latest album, Ritual. “There is an art to making noise and I think we possibly just found it!’” Robb Weir, guitarist and founding member, comments on the song.

Tygers of Pan Tang released their new album in November on Mighty Music. It was their second album with the label and also the second recording by the current line-up. The album was recorded at ex-Tygers’ guitarist Fred Purser’s studio in Newcastle Upon Tyne and mixing and additional production was again conducted by Soren Andersen, most recently known for his role as Glenn Hughes’ guitarist. Mastering done by Harry Hess (Harem Scarem)….

‘Ritual’ features 11 new songs. Of the album title, vocalist Jack Meille explained “Making an album is some kind of ritual. There is something sacred in writing songs as nobody can really tell where the inspiration for a riff or a melody comes from. You can never tell when it’s the right time to write a song and you can allow yourself to be inspired; it’s like embracing the energies of all members and being connected”.

The band worked on the songs for over a year, constantly revisiting and revising their ideas which coalesced in what the band feel is their best album since the revered Spellbound. Guitarist Micky Crystal explained further, “Coming up with the album title was a tricky one as we had all made a conscious effort to not have it be a song title which we felt would steer the listener in the direction of that particular song. We feel that we have an album of songs where each one stands up on its own merit. The one title that we all feel captures the vibe of this album as well as the Tygers was Ritual.”

Following on three years from the critical success of their eponymously titled album Tygers of Pan Tang, the record was supported by international touring throughout the UK and Europe. Additionally, plans are in hand to play Australia and make a return visit to Japan. Original Tyger Robb Weir, whose vision put the band at the forefront of the NWOBHM, feels that with this album is a true successor to those heady days and reflected, “Every album you set out to create is special. Ritual is just that bit extra special! It’s taken two studio postponements, but we now have the right result… a claw ripping, gigantic sabre tooth Tyger kind of an album which you’re gonna love! Don’t be shy to say you think it’s the best… because it is!””

“The Art Of Noise” is taken from the album “Ritual” out worldwide through Mighty Music.Video by Andy PilkingtonVery Metal Arthttps://www.verymetal.co.ukhttps…