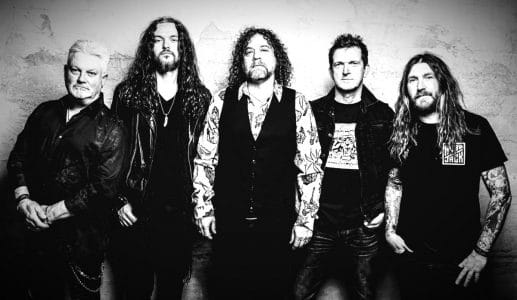 “”White Lines” is the first single and music video from the upcoming album “Ritual“, to be released in November 2019. This is the long-anticipated new album after the 2016 self-titled comeback album, which sold over 10.000 copies worldwide and re-established Tygers Of Pan Tang as a household name around live scenes worldwide.

The guys had this to say about the new single: “”White Lines”, the first single from “Ritual“, refers to life on the road and a soul of a party so we wanted a video that was dark, moody, fast-paced and captured the energy of the band. Gav envisioned the idea for the video to be black and white with quick fire edits. The original song demo was an idea that Robb had and Craig had done a bunch of lyrics for. We’d been jamming the original demo and were actually about to drop the song but we knew the chorus vocal melody and lyrics were strong. Micky began jamming different riffs and played what eventually became the verse riff to the song which the guys said “Yeah, that’s the one”, the rest of the song began to fall into place from there with Jack‘s vocal ideas being the cherry on the top … It’s a great taster for what the new album has to offer and we’re sure after you’ve heard the chorus once you’ll be singing along to it again and again…”

Tygers of Pan Tang are among the most influential New Wave Of British Heavy Metal bands alongside Saxon, Diamond Head, Iron Maiden and Def Leppard. “Ritual” will be supported by an extensive European tour alongside support shows for Saxon.

The “White Lines” single is released today in a limited 12″ vinyl edition with an exclusive B-side being a new recording of the classic Tygers song “Don’t Touch Me There”, which celebrates its 40 years anniversary this year. This new version features guitar solos from Tygers‘ member Robb Weir and Micky Crystal as well as former Tygers member and producer Fred Purser and producer Soren Andersen.

The vinyl is strictly limited to 500 copies.”

“White Lines” is taken from the Tygers Of Pan Tang album “Ritual” – out 22nd of November 2019 worldwide through Mighty Music on ltd colour LP, LP, CD and dig…