Tyketto are getting set on releasing their latest live album Strength In Numbers Live in the fall of 2019 but they need help with the cover art for the upcoming record.

The following message was posted on Tyketto‘s Facebook page yesterday (with slight edits): 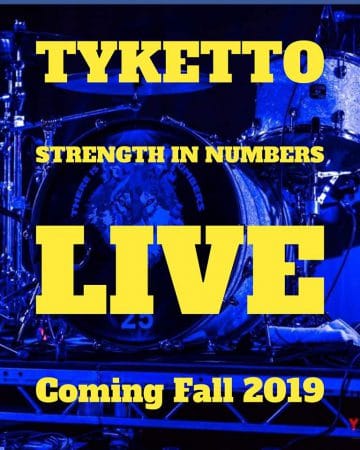 Well, after living with these live mixes for a few weeks, all we can say is…… HOLY S**T!!!

The Strength in Numbers 25th Anniversary Tour this past March was a slam dunk, with both the band and audience in prime form! All the shows had an intense, yet personable energy about them and we can’t wait for the live CD release this fall.

There is such organic feel to this album and we want to keep it as simple and accessible as possible. After considering dozens of titles, “Strength In Numbers Live” seems to say it all.

This is where you come in…..

We are looking for a live photo that personifies the energy and excitement of those shows, and we’re throwing down the gauntlet to each and every one of you to show us what you got! Pro or Amateur, digital camera or Iphone, color or black and white; if you nailed the emotion of the tour, we want to see your pix.

if you think you have a winner, email us at TykettoManagement@Gmail.com, and we can explain all the details.

PS- Don’t forget to visit www.Tyketto.com for tour dates, the merch store and up to date info on the live album release parties this October in England!”

Sleaze Roxx caught Tyketto performing live at Rocklanta in Atlanta, Georgia, USA earlier this year during the band’s Strength In Numbers 25th Anniversary Tour and stated as follows in its concert review:

“I knew that Tyketto were going to be celebrating the 25th year anniversary of their second album Strength In Numbers (1994) by playing quite a few songs of that album. I don’t think that I had ever heard any songs from that album but it didn’t really matter as I knew that Tyketto were a good live band and frontman Danny Vaughn has a great voice and is a good entertainer. This would be my third time seeing Tyketto play live after the M3 Rock Festival in 2015 and 2018. Obviously, Tyketto had their share of diehard fans as I met one woman who had travelled from the Netherlands to see them play at Rocklanta! Given that I wasn’t familiar with any of the songs from Strength In Numbers, I have to say that I liked quite a few of them on a first listen. The best song of that lot had to be the title track, which was likely the “heaviest” one from that album.”