Tyketto postpone fall tour due to family member having cancer

Bad news for Tyketto fans as one of the band’s family member has been struck with cancer for the second time in as many years. Given the situation, Tyketto have announced that they will be postponing their tour this fall in support of their new album Reach, which was just released on October 14, 2016. 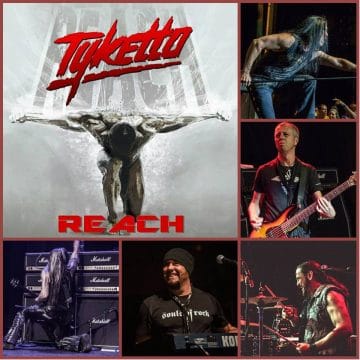 To everyone in our Tyketto family,

There’s really no way to gently deliver this, so I will get right to it. Sharing sad news is never easy, especially with all the good vibrations that are in Tyketto’s world this year. As a memorable lyric from one of my favorite Led Zeppelin songs states, “Upon us all, a little rain must fall”. As you are friends as much as fans, the entire band is at ease in sharing this news with you.

Cancer has come to my wife a second time in as many years. Her scheduled treatment this fall will be more aggressive, including both chemotherapy and radiation. Although we both remain optimistic for a positive outcome, Isabel will have a tough fight getting there. The band has been in discussions since earlier this month on how to handle it, and we finally made the decision to carry on with the November tour while I tended to my wife and young son back in America. We’ve been prepping a great drummer and were planning on making an official announcement at the end of this week. Just as we thought our dilemma was manageable, more bad news has arrived.

While on an Ultimate Eagles show with Danny in Germany this past weekend, Chris Childs was summoned home. He received the sad news that it is just a matter of time before his mother passes. He was immediately on a flight back to the UK, where he currently waits with his family during this difficult time. 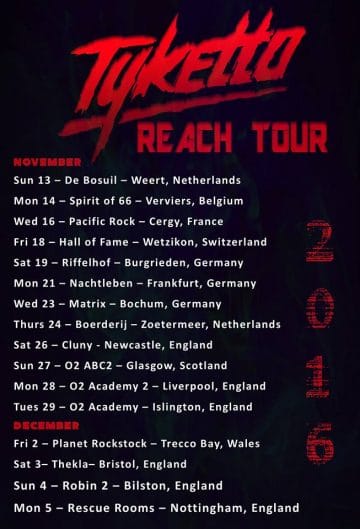 We have all been over the moon excited to share the songs of REACH with you live, but having two of us dealing with family emergencies at the same time will make it impossible for the band to perform this fall.

It is with immensely heavy, yet confident hearts that Tyketto has made the unanimous decision to reschedule the fall tour until 2017.

Normally a band would wait on this announcement until all their business ducks were in a row, but we know that venues need proper notification and all of you made plans taking off of work, arranging childcare and securing lodging. We understand how many people are affected by this decision, so we didn’t want to wait another second. On so many levels, no one is sadder than the five of us.

The venues and agents have all been wonderfully understanding, and we ask that you all take a breath and give us a few days to work through a mountain of logistics. This was a lengthy and complicated tour. We are diligently working on rescheduling dates and are working closely with the promoters in making sure everyone is aware of the changes.

Like any strong family, this sad experience will do nothing but bond us tighter. Personally speaking, my brothers in Tyketto have held me up through one of the toughest times in my life, and I love all four of you for that. We will miss taking the stage together more than you will ever know, but as Mr. Vaughn so beautifully penned on our last album, “Family is what matters most of all”.

Lastly, those of you who know the wonderfully understated Chris Childs will appreciate the volumes this short sentence speaks:
“Let’s get through this difficult time and then show them what we’re really made of.”

Send Izzy and Chris all your positive energy. We can use as much as you can spare. We love you and shall see you in 2017.