Tyketto have released a second video in support of their new album Reach and this time for their song “Kick Like A Mule.” 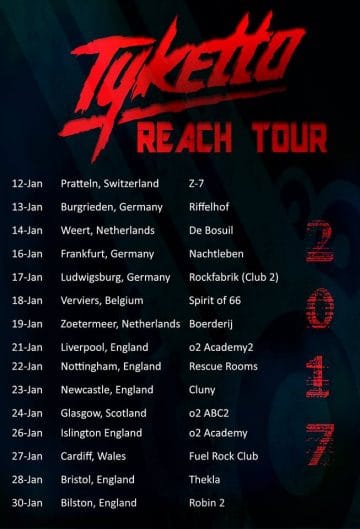 In other news, Tyketto have announced their rescheduled tour dates from their canceled fall tour dates.

The following message was posted in part on Tyketto‘s Facebook page earlier today:

I must admit, it’s been hard to find many things to be happy about over the last few weeks, but as always, Tyketto was the best medicine for me. I played REACH a dozen times, and reminiscing about the sessions in Wales always brought a smile to my face. The outpouring of support from fans, venue owners and agents has also been a source of great comfort to us all. Some things in life transcend business, and everyone in the band has felt the love you’ve been sending all month.

When plans of a reschedule tour commenced, we figured we would only be able to reconstruct a handful of dates, as we felt the odds of venues having availability were slim to none. Even in the darkest hours, Tyketto’s guardian angels were still looking out for us.

It warms our hearts to be able to make this announcement…..The Reach Tour is officially rescheduled for January 2017 and save a handful of venues, we will be hitting most of the same markets as we had planned for in November and December.

Also, as a thank you for your patience, we want you all to enjoy a video we shot while making the album (courtesy of our talented director Chris Childs!)

We are going to spend the rest of 2016 taking care of our families, and we shall see you in January!