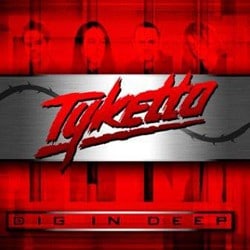 Tyketto Return After 18 Years With ‘Dig In Deep’

Frontiers Records is proud to announce the release of the first new album in 18 years from New Jersey rockers Tyketto. ‘Dig In Deep’ is due out on April 20th in Europe and April 24th in North America and features the original line-up of Danny Vaughn (lead vocals), Brooke St. James (lead guitar/backing vocals), Jimi Kennedy (bass/backing vocals) and Michael Clayton (drums/backing vocals). With recent appearances at Sweden Rock, Download, Firefest, Hard Rock Hell and Hard in Rio, the band realized they still had a huge fan base worldwide and the timing was perfect for a new album.

The first single, “Faithless”, can be exclusively streamed on Frontiers Records’ web radio now at www.frontiers.it/webradio.

Formed in New Jersey in 1990, Tyketto released their major label debut ‘Don’t Come Easy’ in 1991. The album contained the hit AOR songs “Forever Young” and “Seasons” as well as “Wings” and “End Of The Summer Days”, whose respective videos, along with “Forever Young”, were in heavy rotation on MTV. Tyketto has sold hundreds of thousands of albums worldwide.

In a November interview with SleazeRoxx.com Danny Vaughn stated, “It’s a double edged sword, the ‘Don’t Come Easy’ thing, because there will always be some people who, if you try to remake that exact feel, exact vibe and write songs just like those songs, will say ‘they’re just trying to do what they did and make it sell, they’ve got nothing new and it’s the same stuff regurgitated’. If you go out and do something totally different then some people will complain that ‘it’s nothing like ‘Don’t Come Easy’, what do these guys think they are doing?’ So I guarantee there is going to be somebody unhappy.”

“The thing with us is I think we walk both lines, because obviously it’s many years later, so our musicianship is different and the music we’ve been exposed to has changed”, continued the singer. “But we are not going to try and make Tyketto sound like … I can’t think who … but I think it will sound like us. It will have some more maturity to it. I think there are going to be some differences, but I’m not going to change the way I sing. My harmony structures will be similar and my belief in what makes a big chorus is still there. What I do know is that this album is going to be pretty damn aggressive — not in a thrash metal sense. Some of the songs are making me think of Def Leppard. There is a ballad, but I don’t know if there will be more than one. I think it’s going to be a very fast-paced and aggressive record. Now we are starting to throw in the elements that will make it more like what people know of Tyketto — the acoustic guitar will blend in at certain points. I think it will be exactly what it is, people will hear it and go ‘yes, that is Tyketto’ and ‘yes, that is not old Tyketto, that is Tyketto 2011’.”