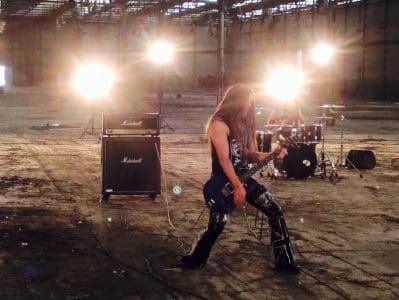 Ten days ago, Tyketto shot their first “real” music video in a whopping 22 years. The video was shot in Madrid, Spain and will be for the group’s new song “Reach” which will be part of the band’s new studio album, which will be released via Frontiers Records in October 2016.

Tyketto‘s frontman Danny Vaughn posted the following message on his Facebook page back on July 14th: “Today Tyketto shot our first music video in 22 years! The new song is called “Reach” and we are forever grateful to the good people of Krea Producciones in Madrid for making a dream come true with all of their hard work. You all will have to wait a while to see it but here are some photos to hold you over for now.”

Sleaze Roxx stated the following in its review of Tyketto‘s last studio album Dig In Deep, which was released back in April 2012: “Yes, you really did see ‘cello’ and ‘violin’ listed as instruments on Dig In Deep, but fear not — the band have stuck to their roots with this album, but not so rigidly that you feel like you’re stepping back a decade or two. The album explores the typical heavy but uplifting Tyketto sound during the opener “Faithless”, while “Here’s Hoping It Hurts” and “Battle Lines” capture the melodic, softer styles the band are also known for writing so well.”