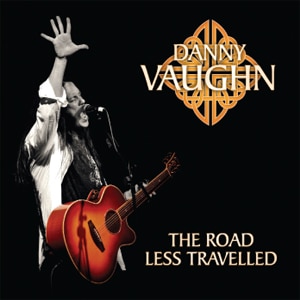 HardRockHouse (www.hardrockhouse.com) is proud to announce the release of “The Road Less Travelled”, the new live album from Danny Vaughn.

Recorded live in Newcastle on December 13th 2008 “The Road Less Travelled” marks a first for Vaughn, a vocalist recently described by Classic Rock magazine as “one of the top voices of the melodic hard rock genre”, in that it sees Vaughn & his band performing a full set of unplugged classics.

Although no stranger to acoustic shows, most notably touring the UK alongside Journey in support of his Traveller album, the Newcastle show is one of only two that Danny has played acoustically with his full band and, judging from the ecstatic reaction of the crowd on the album, it was something that was long overdue.

Mixed by Pete Coleman, the man behind the desk for the Traveller album “The Road Less Travelled” is the perfect snapshot of what was a perfect gig. From the Tyketto classic Lay Your Body Down to newer numbers Visions & Making Waves, “The Road Less Travelled” truly evokes the spirit & atmosphere of what was a remarkable live performance & showcases Danny Vaughn at his very best.

As Danny says, “This album was made by and for my friends – the friends that were behind the scenes encouraging me to do it, the friends on the stage that worked so hard to make it happen and the friends in the audience that came to celebrate and have fun along with us. Even if you weren’t there, you’re a part of it too. Singing is the best way I know to express myself. It s the skill I use for digging deep. Thank you for listening. Thank you for cheering. Thank you for coming along for the ride”.

The Road Less Travelled Track Listing:
Traveller
Making Waves
Soldiers & Sailors On Riverside
Restless Blood
Damn
Jenny Doesn’t Live Here Anymore
Visions
Nothing At All
Lifted
A Million Miles Of Road
When You Walk Away
Lay Your Body Down