American rockers Tyketto will be paying tribute to their debut album Don’t Come Easy throughout 2016 as part of the 25th anniversary celebration of the release of the album. Tyketto‘s debut album contains the successful single “Forever Young.” 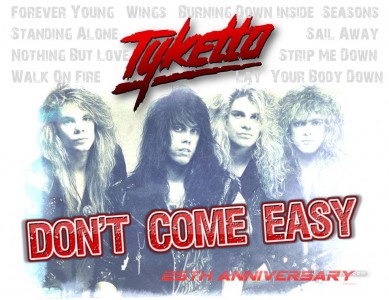 All year long, we will paying tribute to the album that started it all. This quarter century old pic was taken in the bedroom of my Staten Island home by world renowned photographer and uber-nice guy James Lomenzo. (Rumor has it he plays a little bass in his spare time as well.)

Here’s to an incredible 2016… Viva La Don’t Come Easy!
{What’s your favorite DCE song? For me, it’s a tie between Seasons and Sail Away}

From ours to yours; have a wonderful holiday.
Danny, Michael, Jimi, Ged, Chris and Chris“