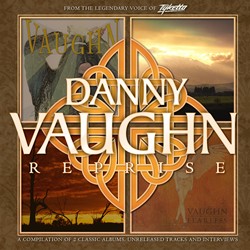 Tyketto vocalist Danny Vaughn, described by Classic Rock Magazine as being, “One of the top voices of the melodic hard rock genre”, returns to the stage in December 2010 with the Inspirations and Aspirations Tour.

Following on from the success of his last album, Traveller, and the 2009 live album, The Road Less Travelled, Danny Vaughn and his band will tour the UK with a concert of two halves. Part one is Inspirations; songs by the artists that influenced Danny Vaughn as a songwriter and singer. Part two is Aspirations; songs covering Danny’s entire career, from Waysted to Tyketto, Flesh & Blood to Vaughn. This is the first time that Danny Vaughn has performed such a wide range of songs in one live show, and with such a variety of artists and songs that inspired him to become a singer/songwriter, you can expect a few surprises to boot!

As you can imagine, for such a performance, you need versatile and exceptional musicians. Danny Vaughn’s band for this tour will include some of the UK’s top musicians; Chris Childs (Thunder), Ryan Aston (Bonnie Tyler) and Christian Phillips (Ultimate Eagles).

Happiness, Sadness, Joy, Heartbreak: For the first time Danny Vaughn will give you his life in music! This is a night not to be missed!

To coincide with the announcement of the Inspirations & Aspirations tour Danny Vaughn will also release “Reprise”, a box set that packages together Soldiers & Sailors On Riverside & Fearless into one fantastic double CD, and adds additional bonus material to make it a superb addition to anyone’s collection.

Speaking about the release of Reprise, Tyketto/Vaughn drummer Michael Clayton Arbeeny says: “For those of you that know the Tyketto history, 1994 was the year that Danny had called it a day as our lead singer. Family commitments made it impossible for him to stay with us. Despite a commendable release with vocalist Steve Augeri on Tyketto’s third studio album, “Shine”, the Tyketto magic wasn’t there, and we called it a day in 1995. It was an abrupt end to an exhilarating run.

Sometime in 1999, after many years of not seeing each other, Danny and I met up in New York City. Within minutes, his acoustic guitar was out and he played me some ideas he had swirling in his head. The connection was still there, and a few weeks later we were in Nashville working on material for what would become VAUGHN’s debut album, “Soldiers and Sailors on Riverside”. A European tour was soon to follow, and our follow up album, “Fearless” arrived in late 2001. As both of these albums were self produced, we were able to forge our own creative path with them. There was a personalization with the Vaughn releases that became very special to Danny and I. The positive reviews on both albums worldwide were sincerely appreciated.

Our paths crossed again in 2004 with a successful Tyketto reunion tour and album release. For the next few years, Tyketto toured nine countries, and was a welcome addition to many festivals in the UK, Sweden and Brazil. The two original Vaughn releases, however, seemed to just disappear.

Recently, we were presented with an offer to buy the original masters of both Soldiers and Fearless from our old label. The thought of being able to own these albums was very appealing to us both. Regardless of how many copies they may or may not sell, this was our music. We felt that with VAUGHN’s short run, many of the Tyketto fans hadn’t gotten a chance to check out some of Danny’s best writing. So after many years off the shelf, these albums are now available. For us, these albums are the “unsung heroes” in the Tyketto anthology, as they reunited the same partnership and brotherhood that launched Tyketto back in 1987.

In early 2010, we will be releasing REPRISE. It is a box set of both Soldiers and Sailors on Riverside and Fearless, as well as “House of Cards” (a song which only appeared as a B side to the “Is that all there is” single), as well as exclusive Danny Vaughn interviews and commentary. As our primary goal is to share this newfound music with you all, we have priced the two disc set for just about what single CD would cost. We are now the band, the label and the management team, and we couldn’t be happier”.

Reprise Track Listing:Bad Water, Is That All There Is, Healing Hands, A Handful Of Rain, Stone Monkey, Shadowland, Soldiers & Sailors On Riverside, Paradise Ain’t Home, Gandy Dance & The Voice, Fearless, Haunted, Fly Away, A Million Miles Of Road, Was There A Moment, When You Walk Away, Dulcimer Street, Just Like That, Carry Me Home.

Reprise will be released on April 5th 2010 and is available to pre-order exclusively via www.hardrockhouse.com