Great news for fans of The Dogs D’Amour as the band’s frontman Tyla continues to forge ahead and has lots of material in store for 2020 with Tyla’s Dogs D’Amour. 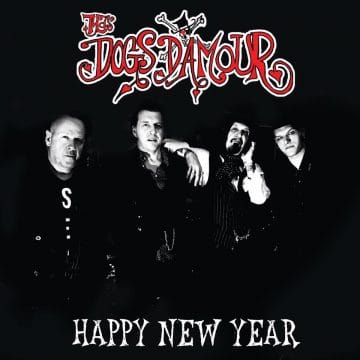 You were a mixed bag….as is life.

We enjoyed some great shows around the UK. Seeing familiar faces and a whole bunch of new ones. New venues and old favourites as always. We made a memorable trip to Germany for a show at Paunchy Cats and all made it back in one piece……just. (Read all about it in Vol. 2 of So Once Was I. ) We had the pleasure of welcoming Scotty back into the fold for some shows in August and had the joy of going on our Jollies with The Dirty Strangers….Pip Mailing banged the bongos for us while Si was away doing his proper job with Squeeze. We revisited a classic and completed the In Vino journey….£20k lighter than we should have been, but as our recorded response said ‘F**k Pledge!’ We welcomed able seaman Corky onboard the ship as a trusted confident and general sorter outer and we of course said so long to absent friends and loved ones. The seas are not always calm in this world and when we are faced with rough waters, it is about the grace in which we navigate them that is important. We ended the year with our usual Xmas do(s) and we released an album that explored our darker side in Jack O’byte Bluesy Vol 1. We don’t like standing still….not at our age (Matty exempt).

So what for 2020? Plans? Of course we have plans. T is releasing some spoken word recordings with a twist early in the new year….you’ll love it! It’s unique! As a painter returns to an unfinished work, we will be revisiting Straight for its anniversary – an album that was a turning point for T – I’m sure he will write it all down or bend your ear about it should you be interested. We are also looking at releasing a brand new album under a similar model to Pl*dge, but through a trusted partner and with 0% risk – as should have been the case with In Vino. More details regarding this will be announced early in the New Year. We are off to Japan for four dates in March and will be looking at dates in Europe for later in the year before the whole Brexshit nonsense deems it financially impossible. For our US friends, we are always looking at ways of getting over to you, but the visa policy doesn’t make it viable at present without sponsorship etc. But don’t lose hope, we will get there.

So all it leaves is for us to once again thank you for your faith and support over the past year and hope that you all have a enjoyable and rocking 2020. See you on the other side!! Tyla, Gaz, Matty and Si. Xx”