It turns out guitarist Bill Hudson‘s tenure as a member of U.D.O. and Dirkschneider was a rather short one. After being announced as the replacement for guitarist Kasperi Heikkinen about 13 months ago, Hudson is now parting ways with former Accept singer Udo Dirkschneider‘s two bands. 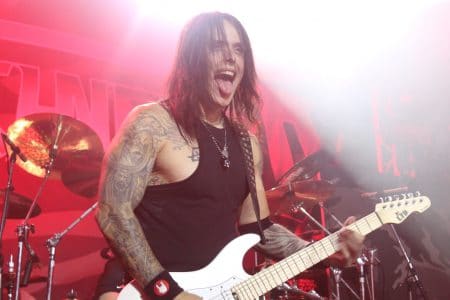 “As of Today, the German-based Metal Band U.D.O. / DIRKSCHNEIDER and their US-based Guitarist Bill Hudson have decided to go their own separate ways. The split is due to a difference in their individual visions for the future, and is without any negative feelings on either side.

Bill will now concentrate on his new project, while U.D.O. / DIRKSCHNEIDER decides on a replacement Guitarist.”

Sleaze Roxx had the opportunity to see Hudson play live in Dirkschneider earlier this year and stated as follows in its concert review: “If you’ve ever been to a Dirkschneider or U.D.O. show, you’ll know that the group members have a little bit of choreography worked out between them. During a song’s verses, Udo Dirkschneider will be in front while guitarists Bill Hudson and Andrey Smirnov along with bassist Fitty Wienhold will stay behind him closer to the drum set until the chorus hits when all three will be side by side with Dirkschneider while providing their background vocals. It’s a pattern that gets repeated just about every song but does provide some additional emphasis to the chorus sections of the songs, which usually has most of the audience singing along as well. Aside from the myriad of tattoos all over his body, Hudson is apparently a workout machine as the man is quite built. So much that when he took off his shirt mid-way through the show, one lady made her way near the front of the stage to take some photos of him while gushing something to the likes of “He took off his shirt! He took off his shirt.””