U.D.O. unleash video for track “Wrong Side of Midnight”

U.D.O. consisting of former Accept lead vocalist Udo Dirkschneider, drummer Sven Dirkschneider, guitarists Andrey Smirnov and Fabian Dee Dammers, and bassist Tilen Hudrap have released a video for their track “Wrong Side of Midnight” from their upcoming live record Live In Bulgaria 2020 – Pandemic Survival Show, which will be available via AFM Records on March 19, 2021. 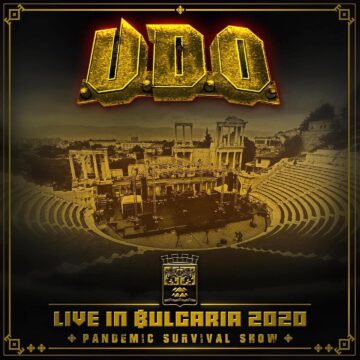 In an interview with Alexandra Mrozowska for Hard Rock Haven earlier this month, Udo Dirkschneider was asked how the show that culminated in Live In Bulgaria 2020 – Pandemic Survival Show to which he stated:

“No, that was not really planned. We got the offer to do a show in Bulgaria during the pandemic – we were invited by the government of Bulgaria – and we said, “If everything is okay, then we’ll do the show.” But it was not planned at that time to do a live record or a [live] DVD. We were not quite sure if we make it at all, but then we got lucky in September. We were able to get together in Germany as we have one guy who lives in Russia [Andrey Smirnov, U.D.O.’s guitarist] and one who lives in Slovenia [Tilen Hudrap, U.D.O.’s bass player]. It was perfect for us also to do the photo shooting there – just in case, as no one knew at the time what will happen – and rehearse, also just in case (laughs). Then we said, “Okay, we’ll wait if this is going to happen.” One week before the show they said, “Okay, everything’s fine” and let us know about location and all that stuff. And we were like, “Why not record it and also film the whole stuff,”, so our production guy started talking to the Bulgarian TV about the cameras and all that equipment. Finally, we flew to Bulgaria and everything was fine [there], no problems at all. And we ended up filming and recording the show indeed, but it was not planned initially.”

U.D.O.‘s “Wrong Side of Midnight” video: