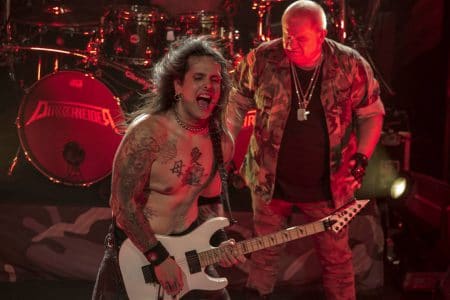 Dirkschneider stated (as transcribed by Blabbermouth with slight edits): “We had a problem with a session guitar player for the second time. Bill Hudson was not the right guy for us. He was not a team player. He was not interested in songwriting and recording the album. It was a little bit strange situation. And then, after the American tour, we said, ‘Okay. Sorry, guy, but this doesn’t work with us.’ And then I don’t wanna have another — how do you say this? — quick looking for a guitar player. And then I was calling Stefan Kaufmann. I mean, we never had any bad things going on, a bad relationship, and I asked Stefan if it was maybe possible to help us out on the festivals. And he said, ‘Yes. No problem. But I don’t wanna join the band anymore. I’ll just help you out until the festivals are over with Dirkschneider.’ And now we have time enough to look for a new guitar player, and I think the end of August, beginning of September, we can announce a new guitar player. We are still doing auditions. There are, let’s say, four guitar players left, and then we will have to make our decision who will be the next guitar player.”