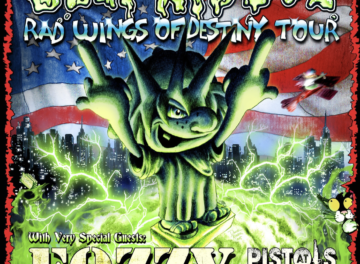 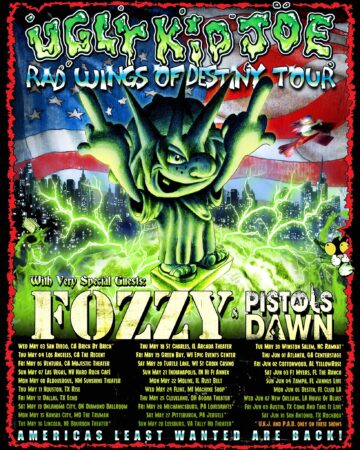 Ugly Kid Joe featuring lead vocalist Whitfield Crane, guitarists Klaus Eichstadt and Dave Fortman, and bassist Crodell Crockett will be embarking on their Rad Wings of Destiny Tour throughout the United States of America from May 3, 2023 to June 10, 2023. The special guests on the tour will be Fozzy (on selected dates) and Pistols at Dawn.

“Americas Least Wanted are back!! It’s been a long time coming but we are stoked to finally announce that Ugly Kid Joe will be touring the USA in May and June 2023!! If that wasn’t enough, we have the amazing Fozzy as special guests on selected dates along with support from Pistols At Dawn. Tickets for all shows go on sale this FRIDAY 20TH JANUARY. Let the radness begin!”

Sleaze Roxx stated the following in its review of Rad Wings of Destiny: “[Mark] Dodson’s production encompasses all the eclectic elements of the band to perfection, the twin guitars of Dave Fortman and Klaus Eichstadt have never sounded better, be it acoustically or in full electric mode, and the alternate drums of Zac Norris and Shannon Larkin are solid, with special mention of Cordell Crockett’s finely understated bass also required. Then of course there’s Whitfield Crane. Now, love him or loathe him, the man can certainly sing and brings the necessary gravitas to each song in whatever style it happens to be. He can also write a fine song which makes the “Lola” inclusion even more baffling, but I guess he had his reasons.

Ugly Kid Joe could easily be forgiven for filling venues on the nostalgia circuit and earning a wedge by playing their hits to the enthusiastic singalong audiences, but Rad Wings of Destiny proves that they still have something often exceptional to offer and is a very impressive “comeback” indeed.”