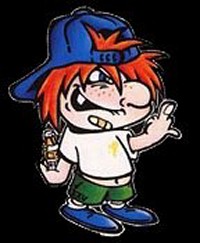 The lineup for the sessions is Whitfield Crane (vocals), Klaus Eichstadt (guitar), Dave Fortman (guitar), Cordell Crockett (bass) and Larkin, the same lineup as their second album, ‘Menace to Sobriety’, according to Gibson.com’s Peter Hodgson.

Larkin, who also is in Godsmack, revealed the album’s status in an interview with California’s 107.7 The Bone at the Rockstar Energy Drink Mayhem Festival. “A lot of the songs, Klaus wrote in ’98,” Larkin said. “It’s a fun band — it’s funny, you listen to the songs and it makes you laugh. Just a good-time rock band, y’know?”

Originally named Overdrive, the band became Ugly Kid Joe as a joke when booked to support Pretty Boy Floyd. The name stuck and they scored hits with “Everything About You,” “Neighbor” and “Cat’s in the Cradle.” Guitarist Fortman, who joined in 1992, went on to produce Superjoint Ritual, Mudvayne, A Simple Plan, Evanescence and Slipknot. Fortman also mixed Anthrax’s forthcoming album Worship Music.