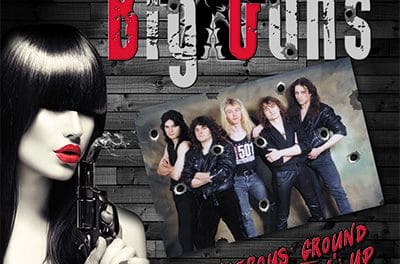 FnA Records is at it again as the label is re-releasing two hard to find albums — On Dangerous Ground (1994) and Stick Em’ Up (2007) — from UK melodic rockers Big Guns on one 16 track album. 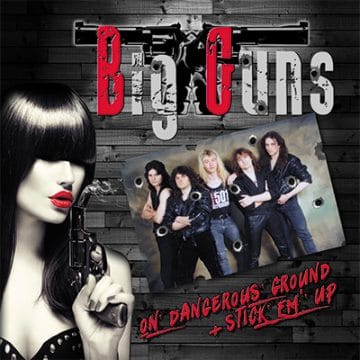 “Big Guns are U.K.’s answer to the legendary hard rockers Danger Danger – A classic AOR/Melodic/Hard Rock band that exemplifies everything that is great about these genres. Big Guns is an AOR-powerhouse and has been on the want list of collector’s for a long time –  and is why their albums fetch such high prices on auction sites.  The band has also been compared to: Baton Rouge, Dokken (at times), Little Angels, Lion, Bronz, and Praying Mantis.

When grunge hit the United States, the music many of us loved didn’t necessarily die…in many cases it just moved east. Far East. As in Japan.  By all accounts, the depressing, downtuned, fuzzy tones of grunge did absolutely nothing in the hair-loving, melodic metal haven of Japan, and so a lot of bands saw this area as a chance to keep doing what they enjoyed and making the music they loved.  Big Guns was signed to EMI-subsidiary, Zero Records (Japan) in 1994, and released an album called On Dangerous Ground. On Dangerous Ground is a piece of melodic hard rock history for those fans familiar with the bands rise.  Later in 2007, the band released a follow up EP called Stick Em’ Up.

FnA Records (www.fnarecords.net) has released the two highly sought after albums on one disc – releasing all 16 tunes that Big Guns has recorded – 10 tracks from On Dangerous Ground and 6 tracks from Stick Em’ Up.

The band formed in February 1994, by drummer Robin Ward and guitarist Wayne Lawson after the demise of Mai Rouge. The band was then joined by vocalist Ian Taylor (Discovery), guitarist Neil Brocklebank (Artisan) and bassist John Ward (Castle Crew, Jokers Wild) – Phil O’Dea would replace Brocklebank after the first album.

When listening to this album, the first thing that really hits me is just how much the lead singer, Ian Taylor, sounds like Kal Swan from Lion. I don’t mean they sound a little alike…they sound like vocal twins for the most part. Taylor, just like Swan, sports a smooth, powerful, lower-tenor range that he never lets drift into falsetto or forced scream territory, which is definitely a good thing, as it gives these melodic rockers a sound that is distinct among all of the clone bands that really put a bullet in heart of the hair metal scene.

Big Guns also knows how to utilize their twin guitar attack, unlike so many bands that don’t really seem to do anything with two (or more) guitars on records, even if they use them to powerful effect live.  O’Dea and Lawson really know how to milk a smooth, soulful sound out of their instruments. This album is full of melodic solos that don’t rely on whammy bars and fret tapping to impress; these guys can flat out play.

Early reviews were good and ‘Big Guns’ were soon on the road throughout the UK headlining shows as well as supporting the likes of ‘Magnum’, ‘Ted Poley’s Bone Machine’, ‘Brian Robertson’, ‘Thunder’ and ‘The Choirboys’.

The album(s) are full of songs that range from groove-oriented rockers to mid-tempo rockers to power ballads to flat out Melodic Hard Rock!

The CD is silver pressed and the average ebay price for On Dangerous Ground is $132.35 and for Stick Em’ Up is $24.64 – and both are now together on one CD at FnA Records.”

This album is available for purchase at www.fnarecords.netAfter the demise of ‘Mai Rouge’, a band who had made substantial waves in the late eighties, early …