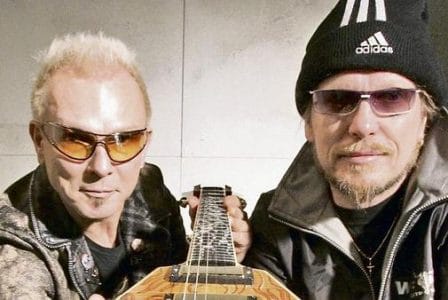 Michael Schenker was part of the Scorpions during two separate stints (1969 to 1973 and 1978 as per Wikipedia) that including playing on the albums Lonesome Crow (1972) and Lovedrive (1979).

Blabbermouth recently reported on some of the comments from Michael Schenker towards his brother Rudolf:

“In a brand new chat with the “Music Mania” podcast, Michael said (hear audio below): “I was 23 years old when I finished with UFO in America, and I opened the doors for the SCORPIONS, who were already 30 years old when I was 23. So Rudolf can’t really quite catch people, newcomers from Russia and China, they cannot put one plus one together together, why [was] the younger one successful before the older one? It doesn’t add up. And usually it’s the other way around. But it was that way.”

He continued: “I taught Rudolf how to play guitar, I taught him how to… He learned from me how to write songs. He wasn’t able to write any song. Everything I did with Klaus [Maine, SCORPIONS singer] he copied, and basically copied by my melodies, he copied everything. He wanted to present a fake, to be a Michael Schenker, confuse the people. And Michael Schenker was off the scene anyway; he was enjoying himself, having fun with experimenting with music, being out of the spotlight. So Rudolf had a clear way to do his thing. But I didn’t know about it. So, in the meantime, when people were asking me in the last thirty years, ‘Oh, what do you think of your brother’s success?’ I said, ‘Yeah, more power to Rudolf. I’m happy for him. As long as Rudolf is happy, I’m happy for him.’ One day I heard him coming into the kitchen at my mom’s place, and he said, ‘This fucking rat race.’ So I knew he wasn’t quite happy, even though he was successful.”

Michael added: “The thing is, he’s doing the opposite of what I do: he steals things, and I focus on the art of lead guitar as pure self-expression; it’s the exact opposite. Rudolf just looks at the trends and sees what’s there and copies everybody else who is successful and does the same thing, and that’s all. It must be a very boring life, but I guess he likes it. But then again, if he comes into the room saying, ‘Fucking rat race,’ maybe he’s not that happy.” 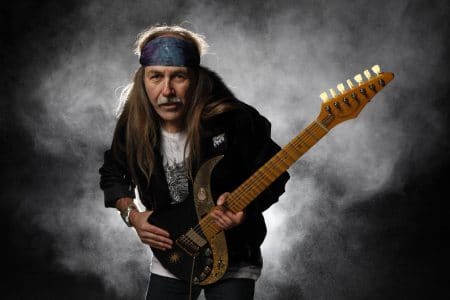 Roth had the following to say to The Metal Voice about Michael Schenker‘s war of words against his brother Rudolf: “It was a little strange, I couldn’t follow it. I don’t know what got into Michael, I thought Rudolf always did good things for Michael. Certainly I cannot second any of that stuff. I’ve been with Rudolf for 5 years extremely closely he is the greatest guy I totally respect him on the human level and as a musician. Maybe he is not like a virtuoso guitar player but he is sure heck of a songwriter and that is rare. Very few people in rock can write a riff like Rock you like a hurricane or stuff that really stays in your mind forever. Rudolf has that gift and that should not be undervalued. I don’t know whats with Michael I don’t know what the problem was maybe he knows something I don’t know but I doubt it. It’s all about different perspectives different people see things, different parts in their lives. “

Roth continued, “Sure some of the stuff Michael said I could understand where he is coming from, yeah ok maybe he plays a flying V. But then again that’s also natural they are brothers, they come from the same kind of background and Rudolf did start the Scorpions. Without Rudolf there would be no Scorpions. Rudolf was the motor from the beginning, he was the only one with the real vision, in that band to go forward, to do that and that’s a tremendous achievement threw thick and thin. The whole thing was a little sad maybe it will all blow over. I love them both, greatest respect and love for Michael who was one the greatest guitar players of all time. but there is no need to go up against your brother. if there is a problem don’t do it publicly and that’s my opinion.”

The Metal Voice‘s interview with Uli Jon Roth on February 21, 2017: