Memphis, Tennessee, USA based Under The Radar have released their self-titled debut EP back on April 22, 2016 and already have two videos under their belt for their songs “Under The Radar” and “More Than You Should Know.” 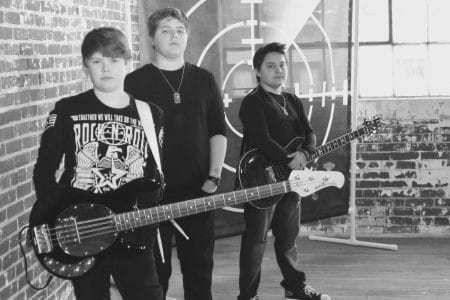 Under The Radar‘s bio on their Facebook page states in part:

“Under The Radar was born in Memphis, TN in August of 2014. Comprised of Zeke (guitar/vocals-age 12), Matt (bass/vocals-age 13), and Ryan (drums/vocals-age 14), they played their first show just one month later. UTR has already performed at major festivals in front of large audiences, won a Battle of the Bands competition, and landed several television appearances on ABC‘s “Local Memphis Live“! These boys are talented, driven, professional, and eager to see where the next steps will lead them…”

“Having opened for bands like Kansas, .38 Special, Saliva, and LA Guns, Under The Radar has proven that they will gladly carry the torch for the next generation of rock fans. The band started in August of 2014 when guitarist/vocalist, Zeke Yarbro, jammed with bassist, Matt Ireland, on a few songs at a show they were attending. They quickly realized they had found a spark with each other and they had to find a drummer to round out the trio. Ryan Halcomb was brought in shortly thereafter and Under The Radar was born. Ryan‘s rock solid time-keeping coupled with 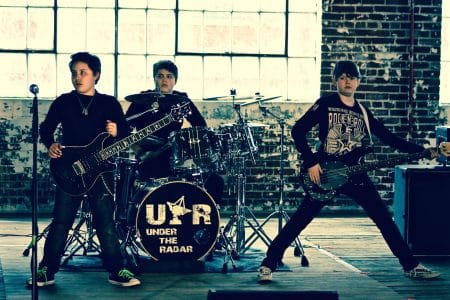 Matt’s thunderous bass lines laid down a solid foundation for Zeke’s rocket fueled guitar chops. Their sound is huge and they hold tight to their classic rock roots. Their musicianship and stage presence are a sight to see and hear. They turn heads everywhere they go!

In the short time they have been a band, they have appeared on the radio and had 4 seperate television appearances. UTR has been featured in the UK on SkyHigh Radio as well as Rock 103 Memphis and several other stations with more to come. They played the Jimi Jamison Tribute and kicked off the New Year’s Eve Guitar Drop at the Hard Rock Cafe on Beale Street this past December. They have been written up by online magazines like: Guitar World, Classic Rock, Prog Rock, Classic Rock Revisited and countless others. In February of 2015 an Italian website called them, “The Baby Trio From Memphis”. The producers from America’s Got Talent were even calling to discuss the boys. They recently released their debut EP with Todd Poole producing and Jimmy Fulp engineering. Jimmy Fulp plays drums in a band called The 5th Kind which includes John Roth (Winger & Starship) on guitar and Jeff Adams (Starship) on bass. Todd Poole was the founding member and lead singer of Roxy Blue, who were signed to Geffen in the early 90’s. He later went on to form the Grammy nominated band, Saliva, and to front the hard driving band, 714. Todd is also the son-in-law of the late great Jimi Jamison, formerly of Survivor, Cobra and Target. Todd has assumed the role of manager, mentor and big brother for the boys and they’re having the time of their life.”

UTR “Under The Radar” Official Video

Under The Radar’s “More Than You Should Know” video:

More Than You Should Know

Here’s our latest video from our debut EP…