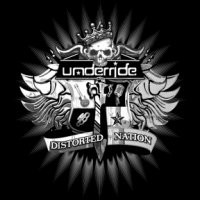 Seattle rockers Underride have just released their new album ‘Distorted Nation’, the follow-up to their Sleaze Roxx Top 10 of 2008 release ‘One Of Us’. The new disc is filled with ‘straight-up American hard rock that feeds your appetite for distortion’ and contains a cover of Lady Gaga’s “Paparazzi”. ‘Distorted Nation’ can be purchased at www.underride.net and www.cdbaby.com.

These days, in the world of rock, too oftendo wires get crossed in a snarly networkof countless subgenres and categories.New bands that are said to be the SecondComing are all too often the first to be going.It’s fierce survival of the fittest out there,but it seems like change for the better hasstarted to take place out of some cities.

From Seattle, a five-piece band calledUnderride has begun a revival of sorts,zapping the apathetic scene, using theirhooky, guitar-driven brand of rock like ahigh-voltage cattle prod. “We’re trying tosave rock and roll. It feels like it’s kindof drifting away…it’s time to bring it backup,” explains Rev, Underride’s lead singer.He, along with guitarists Suzuki Sixx andPrincess, bassist El Barto, and drummerDouble A, blast forth a sound which is ahybrid of melodic hard rock with catchychoruses and a pop sensibility.

Within the sonic stew of Underride liesa myriad of musical influence and flavor–a stew singed and seared from a recipedistinguishably all their own. Crank up asong like the lyrically poignant, “AnotherWay Out” and you’ll hear a sound like ahard rock love child conceived from a wild,drunken hump on the hot hood of a nitroburningfunny car. While real, day-to-daylife subject matter is their songs, Underrideeschews the doomsday drivel which isthe typical shit du jour so many of theircontemporaries are serving up.

The release of Distorted Nation, thefollow-up to the breakout, One of Us (2008),will reaffirm the quintet’s chokehold on theworld of rock.