Unisonic and former Pink Cream 69 drummer Kosta Zafiriou has announced that he will be leaving Unisonic and stopping to perform as a professional drummer to concentrate on the management and booking agency Bottom Row that he runs with two partners.

Zafiriou was part of the Unisonic line-up that saw the reunion of former Helloween bandmates Kai Hansen and Michael Kiske, and which released a self-titled EP (2012), For The Kingdom EP (2014) and Light Of Dawn (2014). 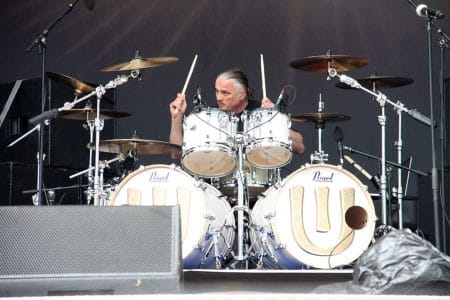 A message from Kosta

Hello friends, fans and all my colleagues in and out of the music business!

It’s been a long journey, but now it’s time for a change in my personal life:

I’m making this official announcement that I have left UNISONIC and will no longer be performing as a professional drummer anymore.

Being busy with BOTTOM ROW over the last years – the management and booking agency I run with my two partners – I found it more and more difficult to keep up the physical condition needed to satisfy my own high expectations of how today´s powerful metal drumming should sound like. As a result, I had to realize that performing was not the fun it used to be, and the need for a change came into my mind.

Since my very first tour with PINK CREAM 69 back in 1989, I toured all over the world and played the biggest metal festivals – I thought I’d end it on a “high note” by letting the UNISONIC show Wacken 2016 be the final show of my drumming career. I will, of course, continue all my business activities and remain UNISONIC‘s manager with all my power & passion.

I want to thank my current bandmates in UNISONIC and the former ones in PINK CREAM 69: It was a pleasure and an honor to make music with you guys!