German power metal rockers Helloween have recently announced that they will be doing a world tour in 2017-18 titled Pumpkins United which will see former Helloween founder, guitarist and singer Kai Hansen (1984-89) and ex-Helloween lead vocalist Michael Kiske (1987-1993) perform on stage with them. 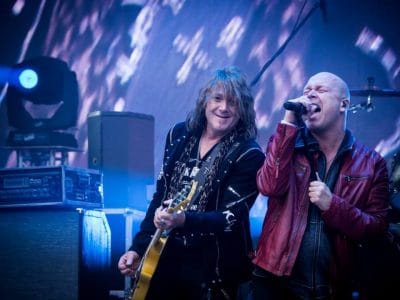 With Hansen and Kiske likely busy with Helloween for one or two years, the question remained what would be happening with Unisonic in the meantime.

The following message was posted on Unisonic‘s Facebook page yesterday:

“Hi to all UNISONIC fans!

As most of you have heard already, HELLOWEEN will team up with Kai & Michael for the PUMPKINS UNITED world tour 2017/2018.

Many, many fans all over the world have been waiting for this event for over 20 years, and with no doubt this will be a historical gathering in the metal universe! Being their musical legacy, this tour is very important for Michael & Kai, but we want to make clear that this is definitely NOT the end of UNISONIC!!!

We´ll take a break for a while and each one of us will continue his individual activities, but as soon as the PUMPKINS UNITED world tour is over we will close the line-up gap with a permanent drummer and start working on our third studio album.

UNISONIC will stay around!”