Unreleased demos from when Michael Sweet left Stryper in 1992 available

Stryper frontman Michael Sweet has provided some incentive for people to purchase from his online website store by offering a CD of four unreleased demos dating back to when he left Stryper back in 1992 when some specific purchases. 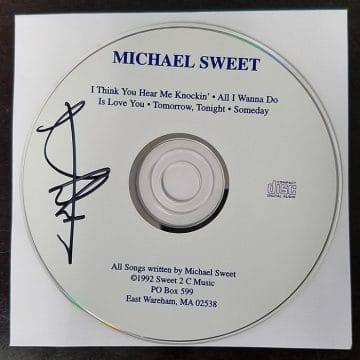 The following message was posted on the online store of Sweet‘s website:

Big news from the Michael Sweet online store: For a limited time, all orders of One Sided War merch come with a FREE autographed CD of previously unreleased demos!

A note from Michael: “This is the first music and demo that I recorded after I left Stryper in 1992. I thought these were all gone until I stumbled upon a box in storage. They are extremely rare and I’m offering them to you as a gift for purchasing any new Michael Sweet merchandise. Once they are gone they’re gone!”

CD ships without cover art, and sorry, signatures can’t be personalized. Limit one CD per order. Your CD will automatically be added to your shopping cart when you purchase one of the products below…”

Please go to the online store of Sweet‘s website to see what items are available for purchase to obtain the CD of unreleased demos.

Wikipedia states the following about Sweet‘s departure from Stryper back in 1992: “After nine years as the lead singer/lead guitarist of Stryper, Sweet left the band in 1992 in order to pursue a solo career. He first released a demo album titled Unstryped, which featured several songs allegedly intended for the band. Sweet later included some of these on his first full-length album.”

All four songs on the aforementioned CD of unreleased demos later appeared on Sweet‘s self-titled album released back in April 1994.