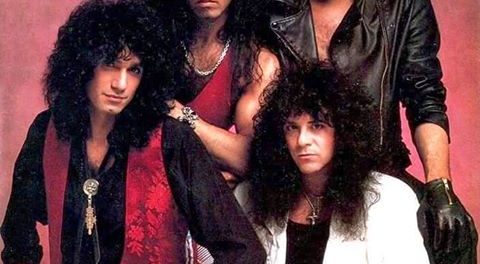 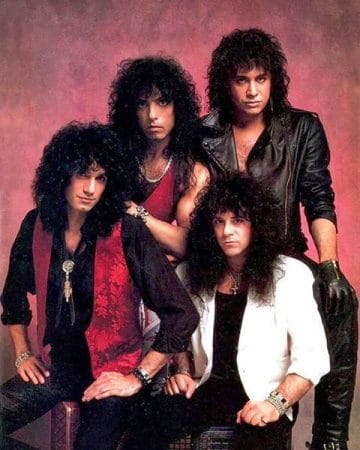 Former KISS guitarist Bruce Kulick was recently interviewed by Michael Cavacini and asked if there was a KISS song he helped to write that didn’t make it on to an album and if so, which song and why didn’t it make the cut?

Kulick responded: “A song immediately comes to mind, and the ironic thing about is that it’s a song other people covered but KISS didn’t release. It’s called “Sword and Stone.” It was written with Desmond Child and Paul, and it was written during the Crazy Nights era. The producer, Ron Nevison, just didn’t like it. I thought it was a really good song. The guy from Loverboy covered it, Desmond included it on a solo album and then a German band covered it. (laughs) All these other people released the song but we didn’t. The fans who’ve heard it – because it got leaked somehow – think it’s a great song. As much as I was flattered that artists were covering a song I was a part of – I kind of started the guitar chords in that song and then brought it to Paul and Desmond – I didn’t make the money I would have made if it would have been on a KISS record, which would have gone Gold or Platinum.”

Wikipedia states the following about the song “Sword And Stone” (with slight edits): “Sword and Stone” is a single released by the German band Bonfire. It was recorded during the session recordings for their third studio album, Point Blank. This song appeared in the Wes Craven movie, Shocker. Included on the single are songs by Saraya and Voodoo X. “Sword And Stone” is written by Paul Stanley and Bruce Kulick of KISS together with producer Desmond Child and was originally a demo for the KISS album Crazy Nights.

Kulick was also asked why didn’t he return to the band too when Ace Frehley left, like Eric Singer did after Peter Criss‘ departure and whether he was ever approached to rejoin the band. Kulick replied: “I know a lot of fans wonder about that. Even with Eric you gotta’ remember there was a bit of yo-yoing there. When the band wasn’t speaking with Peter, insert Eric. Then for the tour in 2003, Aerosmith required that there be more than two original members of KISS for the tour to happen. Since Tommy was already there, they brought back Peter. Things are always more complicated than they seem on the surface.

From the minute this reunion tour was planned, Gene and Paul were very clear that they wanted to get Ace and Peter in good shape. Tommy, who is a fine guitarist and known for being in Black ‘N Blue, which was a great band, was also in a KISS tribute band – I think they were called Cold Gin. So, Tommy knew what it was like to be dressed up like Ace. And it was Tommy who was coaching Ace in the beginning because Ace hadn’t played some of the songs in a long time. Tommy was always a valuable asset to KISS, whether it was writing songs, creating the KISSTORY book or being an understudy for Ace. He was always ready and willing to help. To me, Ace had a flippant attitude once he was back in the band. They never knew if he was going to miss a plane and not show up at a concert. So, Tommy was always ready to put the outfit and makeup on, if need be. And then it happened. Ace wasn’t willing to do certain events with the band, so Tommy stepped in.

Gene and Paul don’t like disfunction and when Ace was in the band there was a lot of that. I was always worried that they’d call me up and ask me to put on the makeup and become the “Spaceman.” It was very stressful for me. On one hand I really missed being in the band. On the other hand, I probably wouldn’t get to be what I was when I was in the band before. I wouldn’t be able to play the guitar the way I used to – they would probably want me to play closer to Ace. And I had already forged a style that really complemented my era of the band and didn’t poop on the previous era of the band. So, I don’t think it was a bad decision at all to ask Tommy to step into that role. As much as I missed being in the band, having to put on the makeup and become the “Spaceman” would require completely closing the door on something I was and taking on another persona, which would be awkward.

I think it was much less awkward for Eric behind the kit as the “Catman.” He was still his own man. But how do you put on the “Spaceman” outfit and shoot rockets out of your guitar and move around like that and play the notes like that, almost exactly like Ace, and not be the “Spaceman”?”

You can read the rest of the interview with Kulick at michaelcavacini.com.