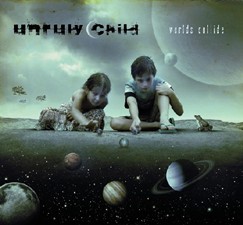 After disbanding over sixteen years ago, all the original members of the legendary Melodic Hard Rock quintet Unruly Child, have reunited to produce a brand new album entitled “Worlds Collide” due for release on October 15th in Europe and October 26th in the USA on Frontiers Records.

Since the initial release of the critically-acclaimed “Unruly Child”, all the band members have successfully pursued accomplished careers in the music industry. Marcie Michelle Free, one of the world’s finest and in recent times, most renowned transgendered vocalists, first released a solo record as Mark Free entitled “Long Way From Love” in 1993 and then another solo record as Marcie Free titled “Tormented” in 1996.

While the original band may have been disbanded, guitarist Bruce Gowdy and keyboardist Guy Allison were not dormant during the past 16 years. They produced two more Unruly Child records without Free, and participated on another World Trade album with Schellen. They have also pursued other projects and their reputation as writers, performers and arrangers is second to none with experiences with the likes of Glenn Hughes (Deep Purple), Bobby Kimball (Toto), Doobie Brothers, Boz Scaggs, Air Supply and The Moody Blues. Drummer Jay Schellen and bass player Larry Antonino are a solid powerhouse rhythm section. After Schellen worked with Gowdy and Allison on World Trade’s “Euphoria” in 1995, he rejoined Hurricane with singer Kelly Hansen on “Liquifury”. He also was part of the Asia album “Silent Nation” line-up and keeps touring and recording with Asia featuring John Payne nowadays. Antonino has played with Ambrosia and Air Supply and in addition to being one of the world’s most respected bass players, he has pursued acting, with his most notable role being that of “The Wolfman” in the movie “That Thing You Do” starring Tom Hanks.

But the puzzle would not quite be complete until the awesome cover art was designed by none other than the famed, Hugh Syme (Rush, Megadeth, Whitesnake etc.). The final piece for the ultimate reunion, as he also designed the original Unruly Child debut album artwork.

“When Bruce called me, I knew what he was going to ask me before the words came out of his mouth”, says Marcie Free ” Two weeks before I had a long talk with my higher power and he told me it was time I came out of retirement to start giving back what has been given to me. So you could say it is divine providence”. “This whole record “Worlds Collide” was a surprising experience, it’s like we never left” adds Bruce Gowdy, while Guy Allison say “While we initially thought that we’d have to try to think like “Unruly Child”, we discovered that once we got together again, it was really second nature. One of the absolute strengths of this version of the band is how we are able to get out of each other’s way. There’s an unspoken trust between Bruce, Marcie and myself – and it allows us to bring our separate visions together perfectly. Once you add the talents of Jay and Larry to the mix, it’s like magic”.

With so much excitement centered around their new record it has sparked fires of tour talk. Something this group has never done before. Will they hit the road in Europe or the States? “We all have been talking about doing some live shows and the prospects are good that we will. We have been hearing from quite a lot of European promoters so we will have to sit down with them and plan something. It’s looking like summer of 2011 is a good possibility” tells Marcie. The band already has material in preparation for a follow up, but will likely release a remixed, remastered and updated version of “Tormented” with bonus tracks and new material before breaking ground on the next record.

Unruly Child are also in the process of securing the rights to their first record for a future re-release.

The group, in its constant state of evolution has generated an exciting new album reflecting its musical roots in contemporary and classic rock sensibility. With the return to the original line-up, they have discovered that while time may pass, some things never change. In their case, that’s a good thing. The future looks very promising for the rebirth of Unruly Child.

The songs “Very First Time” and “When Worlds Collide” can exclusively be listened to in full by streaming on the Frontiers Web Radio from August 31st.Tune in at: www.frontiers.it/webradio