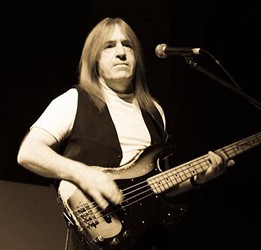 Uriah Heep and Spiders From Mars bassist Trevor Bolder has died from cancer, aged 62. Bolder joined David Bowie’s backing band in 1971, appearing on classic albums including ‘Hunky Dory’ and ‘Aladdin Sane’. He went on to join Uriah Heep five years later and only stopped playing with the band a few months ago, due to his poor health.

A statement from Uriah Heep said, “It is with great sadness that Uriah Heep announce the passing of our friend the amazing Trevor Bolder, who has passed away after his long fight with cancer. Trevor was an all-time great, one of the outstanding musicians of his generation, and one of the finest and most influential bass players that Britain ever produced. His long-time membership of Uriah Heep brought the band’s music, and Trevor’s virtuosity and enthusiasm, to hundreds of thousands of fans across the world. He joined the band in 1976 and, barring one short break, was a fixture until his ill health forced him to take a step back early this year. Prior to joining Heep he was a founder and ever-present member of David Bowie’s legendary Spiders From Mars band, performing on all of their key albums and at countless shows. He also performed with Wishbone Ash, Cybernauts and The Rats.”

Uriah Heep lead guitarist Mick Box said, “Trevor was a world-class bass player, singer and songwriter, and more importantly a world-class friend. He will be sadly missed by family, friends and rock fans all over the world. We are all numb to the core.”

David Bowie stated, “Trevor was a wonderful musician and a major inspiration for whichever band he was working with. But he was foremostly a tremendous guy, a great man.”

Def Leppard frontman Joe Elliott, who performed with Trevor in the David Bowie cover band Cybernauts said, “I had the great pleasure of knowing Trevor for the best part of 30 years, he was one of my idols growing up, I got to know him when Uriah Heep opened for Def Leppard on the Pyromania tour in 1983 and we became firm friends. I stayed with him, he stayed with me and we recorded and toured together as The Cybernauts. For myself & Phil (Collen) it’s devastating because we were looking forward to finishing up some new Cybernauts recording pretty soon, that may now not happen, but our real thoughts right now are with his family. TB was one of the good guys, I’m sure Mick Box & the guys in Heep feel the same way, we have lost a brother, a great bass player, a funny, funny man who lit up any room he walked into. I guess now, him & Ronno have a bit of catching up to do… RIP my friend”.