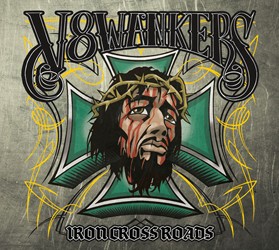 German beer for breakfast rockers V8 Wankers will release their sixth album ‘Iron Crossroads’ worldwide through Steamhammer/SPV. The CD will be released on April 15th in Germany and a month later in North America. The album was produced by Tommy Newton (well known for his work with Bands like Helloween, Terry Hoax, Guano Apes, UFO and many others) and the band sounds better and fresher than ever before. Big-Blog-Motor Rock at its best.

In the year 2000 the V8 Wankers founded the band in Offenbach, Germany. Shortly after their formation the band performed their first live gigs with Skew Siskin and Rose Tattoo.

2002 saw the release of the V8 Wankers debut album ‘Blown Action Rock’. The album’s release was supported with extensive touring including a show where they shared the main stage of the “Bizarre Festival” in Germany with Turbonegro. This year also saw the band playing shows in Croatia with hard rock legends Motorhead.

2003 and 2004 were busy years for the V8 Wankers as they released their second album ‘Autmotive Rampage’ and re-released their first album with bonus material. Over the next few years, the band recorded 3 more albums and toured extensively through Europe.

2011 starts a new chapter in the story of the V8 Wankers. The band signed to SPV/Steamheammer and will see the release of their sixth album ‘Iron Crossroads’. The album will be released in CD, Digital and Double LP formats — the LP version will include two exclusive bonus tracks.