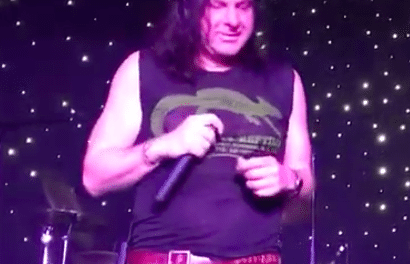 Cult rock legends Vain performed at the recent Monsters of Rock Cruise and their frontman Davy Vain had a funny story about getting a call from KISS bassist Gene Simmons that the former share with the audience before the group launched into the song “Who’s Watching You” during its first MORC set on February 25, 2019. The video footage is courtesy of Alex Vigil.

Vain recalled (as transcribed by Sleaze Roxx): “One day, I got a call and answered the phone, ‘Hey! What’s up.’ [Davy Vain in a deep voice] ‘Hi Davy. It’s Gene Simmons from KISS.’ It’s like, ‘Yeah. Who is it man? Who do I know with a low voice? This 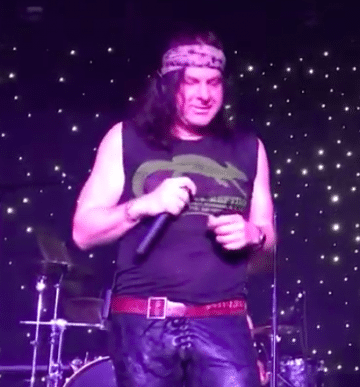 isn’t KISS. This is whatever man.’ [Davy Vain in a deep voice again] It’s me. It’s Gene Simmons from KISS. I have my new label [and] checking your stuff out.’ I’m like, ‘Who the fuck is this? C’mon! Stop fucking with me.’ I swear to God. He just paused and went [Davy Vain in a deep voice again] ‘Davy. Listen carefully. It’s Gene Simmons. You know my voice. You’ve been listening to me your whole life. I’m one of your idols.’ And then it hit me, I was a kid listening to KISS and I go, ‘It’s fucking Gene Simmons of KISS and he’s fucking calling me.’ ‘What’s up man! What’s going on?’ I’m telling you, he was already in this bit in ’93 that ‘We are all fucked. Rock is fucked up right now. I was going to check your band out but you guys look too fit and you don’t wear your grandfather’s sweater and shit.’ And he’s like, ‘You can’t look like you had sex if you want to make it right now. You got to look like you were just a fucking high school loser [laughs].’

I was like, ‘I didn’t fuck any chicks in high school until I got in a band. And he goes, ‘Yeah, but you look like you do now and that’s the problem. People know who you are.’ He said, ‘Listen, you’re not the only one. I’m screwed too. We’re all fucked.’ And I’m like, ‘This is fucking surreal!’ All of a sudden, the phone cuts off, right? ‘Hello. Hello. oh shit!’ I called my manager really quick and I’m like, ‘You’re not going to fucking believe this. The God of Thunder just called me to tell me rock n’ roll is dead.’ She goes, ‘Are you sure it was him and not a prank?’ I go, ‘I know in my soul it’s fucking him.’ And all of a sudden, I hear the call waiting and I go, ‘Fuck! Hang up.’ [Davy Vain in a deep voice] ‘Davy, it’s me again. My limo went under a bridge.’ [Laughs] Swear to God! I go, ‘At least you have a limo too.’ He says [Davy Vain in deep voice], ‘Fucking right Davy but you… I’m really worried. We’re all fucked and you know in your heart that I’m telling the truth. My advice to you is to gain some weight and to look like a different person.’ [Laughs] He goes, ‘I think that you’ve got ripped abs right now and that’s not going to make it right now.’ So at the end… This went on for a long time and we only have so long of a set. But anyway, at the very end of the conversation, he said the greatest thing that’s so funny. He said, ‘The bottom line is what I’m saying Davy, is that right now, nobody wants to see guys running around stage singing about how great their cocks are.’ And then he paused and said, ‘Ain’t it a shame?’

Vain performing “Secrets” live at the Monsters of Rock Cruise on February 25, 2019:

Vain performing “Who’s Watching You” live at the Monsters of Rock Cruise on February 25, 2019:

Vain performing “Breakdown” live at the Monsters of Rock Cruise on February 25, 2019:

Vain performing “No Respect” live at the Monsters of Rock Cruise on February 25, 2019:

Vain performing “Beating The Bullet” live at the Monsters of Rock Cruise on February 25, 2019: