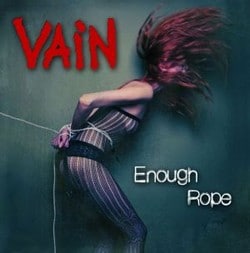 MusicBuyMail.eu is pleased to announce the release of a new Vain album entitled ‘Enough Rope’ on October 28th.

Davy Vain has a list of accomplishments under his belt few artists today can rival. Hailing from the San Francisco Bay Area, Davy began his rise as the frontman/songwriter/producer for the band Vain. Their debut record, ‘No Respect’ (originally released by Island Records), continues to receive critical acclaim worldwide having landed them on the cover of such notable music publications as Kerrang! and BAM. It is clearly evident from the praise garnered from the music press and more importantly other musicians, that Davy has an incredible knack for writing great songs.

As the music industry progressed and changed, Davy explored his creativity and musicianship even further. Remaining true to his musical integrity each of his recordings is filled with catchy hooks and choruses, rampant with melodies, and loaded with fresh and creative guitar sounds. Davy’s voice is one of the most unique, hypnotic and original voices in rock and roll. It invokes and inspires you with a style that is entirely his own. His recorded and live performances are electric, raw, and infused with a power and magic that is as rare today as it was when Davy first started playing out.

The new amazing album ‘Enough Rope’ follows on seamlessly from the glory days of their debut ‘No Respect’. Even the upcoming film “Rock of Ages” with Tom Cruise pays respect to Vain by featuring posters and music of this all time classic band.

The album is being released on CD and digital format in Europe and USA by Music Buy Mail (www.musicbuymail.eu, with a limited edition) and in Japan by Spiritual Beast/Universal, followed by a tour in early 2012.